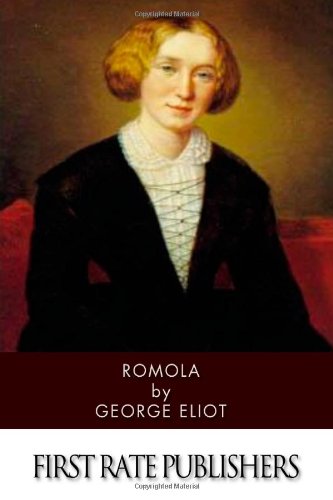 George Eliot was one of the best writers of the 19th century, but By George, this was no man. Instead, George Eliot was the pen name of Mary Anne Evans, a skilled female novelist who wanted to make sure her work was taken seriously by using a masculine pen name. The practice was widely used in Europe in the 19th century, including by the Bronte sisters. Regardless of her name, her work became well known in its time for realism and its psychological insight, including novels like Adam Bede (1859), The Mill on the Floss (1860), Silas Marner (1861), Middlemarch (1871–72), and Daniel Deronda (1876), most of them set in provincial England. Her work also infused religion and politics, and Victorian Era readers were fond of her books’ depictions of society. Romola is a historical novel written by Eliot that takes place in Florence during the height of the Renaissance.

"George Eliot's humanity colors all her other gifts--her humor, her morality, and her exquisite rhetoric." --Henry James

The most exotic of George Eliot's works, Romola recounts the story of the famous religious leader Savonarola in Florence at the time of Machiavelli and the Medicis. Of all her novels, this was the author's favourite.

No other Eliot novel was illustrated in its first edition. Romola, however, was sought by George Smith for serialization in the prestigious illustrated Cornhill Magazine. Smith commissioned illustrations for the novel from the rising young artist Frederick Leighton, who had studied in Florence in the 1840s and had frequently painted Florentine Renaissance subjects. Romola was serialised with the Leighton illustrations in the magazine from July 1862 to August 1863. It was first published in book form in 1863; the first edition was published by Smith, Elder in three volumes, and a one-volume edition in two-column format with all but one of the Leighton illustrations was published later that year by Harper & Brothers in the United States. This facsimile reprint is of the one-volume 1863 Harper & Brothers edition, and includes 8 pages of original advertisements from the back of the book.

This is one of a series from Broadview Press of facsimile reprint editions--editions that provide readers with a direct sense of these works as the Victorians themselves experienced them.

Book Description Paperback. Condition: Very Good. The book has been read, but is in excellent condition. Pages are intact and not marred by notes or highlighting. The spine remains undamaged. Seller Inventory # GOR008699912