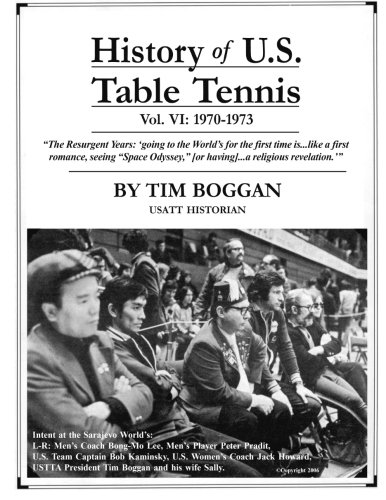 These comprehensive volumes cover the history of U.S. Table Tennis from its late 19th century beginnings. Volume 6 covers the years 1970-1973.

Tim Boggan is a former International Table Tennis Federation Vice-President, a former three-term President of the United States Table Tennis Association (now USA Table Tennis), and a former Secretary of the Association. For 13 years he served as Editor of the USTTA’s National Publication, then followed by editing his own magazine. He is the author of Winning Table Tennis (1976), and thereafter Volumes I through X of his continuing multi-volume History of U.S. Table Tennis. He taught English at Long Island University in Brooklyn for 33 years, and since 1965 has been a prodigious writer for the Sport. Having retired from teaching, he is currently the Association’s Historian and Chair of its Editorial Advisory Board. He has received the ITTF Order of Merit Award and the USTTA Barna Award. In 1985 he was inducted into the USTTA Hall of Fame, and in 2006 received the Mark Matthews Lifetime Achievement Award. He was a member of the 1971 U.S. "Ping-Pong Diplomacy" Team that opened the door to China, and since then has attended, as official or journalist, more than 25 World and International Championships. In 1975 he captained the U.S. Team to the Calcutta World’s. As a player through six decades, he has on occasion, in addition to some modest early tournament success, and, later, some success in World Veterans Championships, been the U.S. Over 40, 50, 60, and 70 Singles and Doubles Champion. Tim and his wife Sally have been married for over 50 years. Both of their sons, Scott and Eric, were U.S. Junior then U.S. Men’s Singles and Doubles Champions. Both are in the U.S. Hall of Fame.