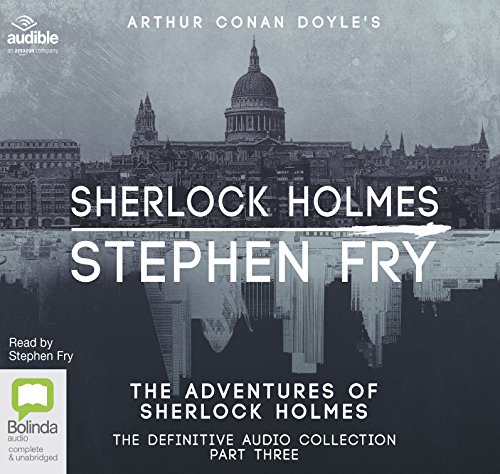 Ever since he made his first appearance in A Study In Scarlet, Sherlock Holmes has enthralled and delighted millions of fans throughout the world. Now Arthur Conan Doyle's complete works – four novels and five collections of short stories – has been brought to life by Stephen Fry, a lifelong fan of Doyle's detective fiction, in this The Definitive Collection. In addition, Stephen has written and narrated nine insightful, intimate and deeply personal introductions to each title. Part 3: The Adventures of Sherlock Holmes From his residence at 221B Baker Street, Sherlock Holmes solves a series of baffling and bizarre cases, including those of a man terrified by the arrival of an envelope containing orange pips, and a woman whose fiancé disappeared on his way to their wedding. Each story showcases the great detective's inimitable and extraordinary deductive powers, recounted to us by his faithful friend and colleague, Dr Watson.

The third instalment of Sherlock Holmes: The Definitive Collection, narrated by Stephen Fry.

Sir Arthur Conan Doyle was born in Edinburgh in 1859 and died in 1930. Within those years was crowded a variety of activity and creative work that made him an international figure and inspired the French to give him the epithet 'the good giant'. He was the nephew of 'Dickie Doyle' the artist, and was educated at Stonyhurst, and later studied medicine at Edinburgh University, where the methods of diagnosis of one of the professors provided the idea for the methods of deduction used by Sherlock Holmes. He set up as a doctor at Southsea and it was while waiting for patients that he began to write. His growing success as an author enabled him to give up his practice and turn his attention to other subjects. His greatest achievement was, of course, his creation of Sherlock Holmes, who soon attained international status and constantly distracted him from his other work; at one time Conan Doyle killed him but was obliged by public protest to restore him to life. And in his creation of Dr Watson, Holmes's companion in adventure and chronicler, Conan Doyle produced not only a perfect foil for Holmes but also one of the most famous narrators in fiction.