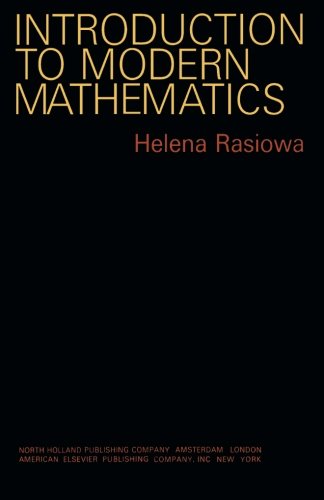 Introduction to Modern Mathematics focuses on the operations, principles, and methodologies involved in modern mathematics. The monograph first tackles the algebra of sets, natural numbers, and functions. Discussions focus on groups of transformations, composition of functions, an axiomatic approach to natural numbers, intersection of sets, axioms of the algebra of sets, fields of sets, prepositional functions of one variable, and difference of sets. The text then takes a look at generalized unions and intersections of sets, Cartesian products of sets, and equivalence relations. The book ponders on powers of sets, ordered sets, and linearly ordered sets. Topics include isomorphism of linearly ordered sets, dense linear ordering, maximal and minimal elements, quasi-ordering relations, inequalities for cardinal numbers, sets of the power of the continuum, and Cantor's theorem. The manuscript then examines elementary concepts of abstract algebras, functional calculus and its applications in mathematical proofs, and propositional calculus and its applications in mathematical proofs. The publication is a valuable reference for mathematicians and researchers interested in modern mathematics.