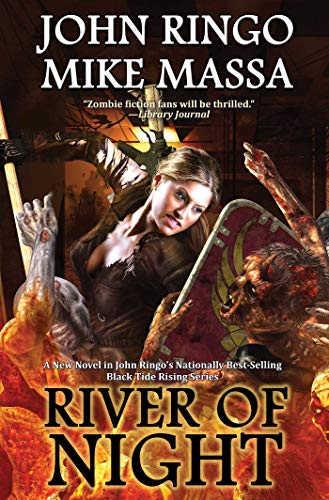 John Ringo brings fighting to life. He is the creator of the Posleen Wars series, which has become a New York Times best-selling series with over one million copies in print. The series contains A Hymn Before Battle, Gust Front, When the Devil Dances, Hell's Faire, andEye of the Storm. In addition, Ringo has penned the Council War series. Adding another dimension to his skills, Ringo created nationally best-selling techno-thriller novels about Mike Harmon (Ghost, Kildar, Choosers of the Slain, Unto the Breach, A Deeper Blue, and, with Ryan Sear, Tiger by the Tail). His techno-thriller The Last Centurion was also a national bestseller. A more playful twist on the future is found in novels of the Looking-Glass series: Into the Looking Glass, Vorpal Blade, Manxome Foe, and Claws That Catch, the last three in collaboration with Travis S. Taylor. His audience was further enhanced with four collaborations with fellow New York Times best-selling author David Weber: March Upcountry, March to the Sea, March to the Stars and We Few. There are an additional seven collaborations from the Posleen series: The Hero, written with Michael Z. Williamson, Watch on the Rhine, Yellow Eyes and The Tuloriad, all written with Tom Kratman, and the New York Times best seller Cally's War and its sequels Sister Time and Honor of the Clan, all with Julie Cochrane. His science-based zombie apocalypse Black Tide Rising series includes Under a Graveyard Sky, To Sail a Darkling Sea, Islands of Rage and Hope and Strands of Sorrow. A veteran of the 82nd Airborne, Ringo brings first-hand knowledge of military operations to his fiction. Mike Massa has lived a diverse and adventurous life, including stints as Navy SEAL officer, an international investment banker and an Internet technologist. He counts his greatest adventures as marriage and parenthood. Mike is currently a university cyber security researcher, consulted by governments, Fortune 500 companies and high net worth families on issues of privacy, resilience and disaster recovery. He lived outside the U.S. for several years (plus military deployments!) and has traveled to over eighty countries. Mike is pleased to call Virginia home, where he passionately follows the ongoing commercial space race, looks forward to family holidays, and enjoys reading the latest new books by his favorite SF&F authors.

Book Description Baen Books, United States, 2019. Hardback. Condition: New. Language: English. Brand new Book. Tom Smith used to be somebody. Now he's just another refugee, fleeing the smoking ruins of civilization.Well, maybe not just another refugee. Late of the Bank of the Americas where he used to be the global managing director for Security, Tom and his f. Seller Inventory # AAS9781481484213

Book Description Hardcover. Condition: New. Hardcover. A NEW NOVEL IN JOHN RINGO'S BESTSELLING BLACK TIDE RISING SERIES. Sequel to The Valley of Shadows. THROUGH THE RAGING PLAGUE At Tom Smith's previous gig, he was the global managing directo.Shipping may be from multiple locations in the US or from the UK, depending on stock availability. 352 pages. 0.584. Seller Inventory # 9781481484213

Book Description Baen Books, United States, 2019. Hardback. Condition: New. Language: English. Brand new Book. Tom Smith used to be somebody. Now he's just another refugee, fleeing the smoking ruins of civilization.Well, maybe not just another refugee. Late of the Bank of the Americas where he used to be the global managing director for Security, Tom and his f. Seller Inventory # BZV9781481484213