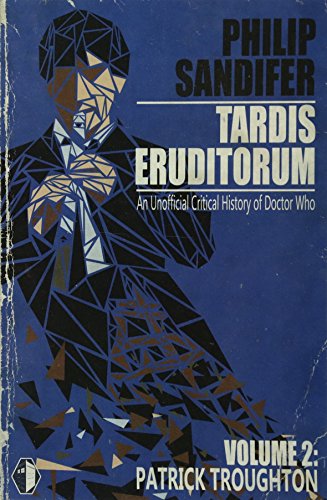 This second volume of collected and expanded posts from the popular blog TARDIS Eruditorum offers a critical history of the Patrick Troughton era of Doctor Who. Steadily tracking the developing story of Doctor Who from its beginning to the present day, TARDIS Eruditorum pushes beyond received fan wisdom and dogma to understand the story of Doctor Who as the story of an entire line of mystical, avant-garde, and radical culture in Great Britain: a show that is genuinely about everything that has ever happened, and everything that ever will. This volume focuses on Doctor Who’s intersection with psychedelic Britain and with the radical leftist counterculture of the late 1960s, exploring its connections with James Bond, social realism, dropping acid, and overthrowing the government. Along, of course, with scads of monsters, the introduction of UNIT, and the Land of Fiction itself. Every essay on the Troughton era has been revised and expanded, along with eight brand new essays written exclusively for this collected edition, including a thorough look at UNIT dating, an exploration of just what was lost in the wiping of the missing episodes, and a look at Stephen Baxter’s The Wheel of Ice. On top of that, you’ll discover: Whether The Mind Robber implies an alternate origin for the Doctor in which he is not a Time Lord but a lord of something else entirely. How The Evil of the Daleks reveals the secrets of alchemy. What can be seen on a walking tour of London’s alien invasions.

Philip Sandifer has a PhD in English focusing on film and media studies. He teaches and is a freelance writer.