Items related to The Play of Death (UK Edition) (A Hangman's Daughter...

The Play of Death (UK Edition) (A Hangman's Daughter Tale) 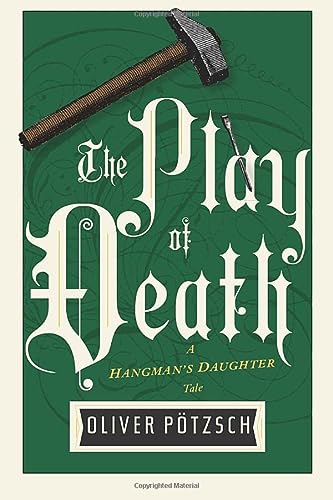 The mysterious sixth entry in the Hangman’s Daughter series.

It is 1670 and Simon Fronwieser is in the town of Oberammergau to bring his seven-year-old son to boarding school. As he bids his boy a tearful farewell, news comes of a shocking murder: the man who was to play the part of Christ in the town’s Passion play has been found dead, nailed to the set’s cross. As there is no doctor in town, Simon is brought in to examine the body. The opportunities to spend more time with his son and to investigate the murder quickly convince him to stay.

Soon he is joined by his father-in-law, Jakob Kuisl, the Schongau hangman, and the two begin piecing together the puzzle of the actor’s death. Was he murdered by a jealous rival? Are the recently arrived and unpopular immigrant workers somehow involved? Or is it a punishment from God for the villagers’ arrogance in trying to schedule the play four years earlier than prescribed by ancient custom? Once again it looks like it is up to the Kuisls to unravel the mystery and bring a town’s dark secrets to light.

"The plot is layered and complex, every corner a surprise as danger hides in smoke-filled taverns, lurks along muddy trails and in the forested mountains . . . Another provocative mystery in an uncommon setting." -- Kirkus Reviews

Oliver Pötzsch, born in 1970, has worked for years as a scriptwriter for Bavarian television. He is a descendant of one of Bavaria’s leading dynasties of executioners. Pötzsch lives in Munich with his family.

Lee Chadeayne, translator, is a former classical musician and college professor. He was one of the charter members of the American Literary Translators Association and is editor-in-chief of the ALTA Newsletter.

1. The Play of Death (UK Edition) (A Hangman's Daughter Tale)