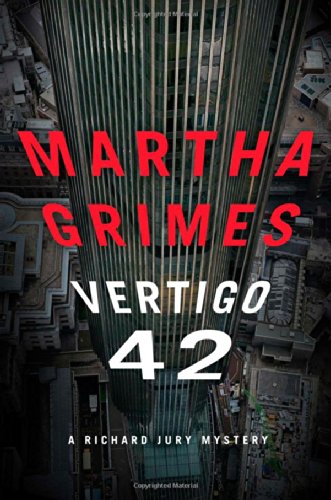 In her latest Richard Jury mystery, Martha Grimes delivers the newest addition to the bestselling series "The Washington Post" calls literate, lyrical, funny, funky, discursive, bizarre. The inimitable Scotland Yard Superintendent returns, now with a tip of the derby to Alfred Hitchcock s "Vertigo." Richard Jury is meeting Tom Williamson at Vertigo 42, a bar on the forty-second floor of an office building in London s financial district. Despite inconclusive evidence, Tom is convinced his wife, Tess, was murdered seventeen years ago. The inspector in charge of the case was sure Tess s death was accidental a direct result of vertigo but the official police inquiry is still an open verdict and Jury agrees to re-examine the case. Jury learns that a nine-year-old girl fell to her death five years before Tess at the same country house in Devon where Tess died. The girl had been a guest at a party Tess was giving for six children. Jury seeks out the five surviving party guests, who are now adults, hoping they can shed light on this bizarre coincidence. Meanwhile, an elegantly dressed woman falls to her death from the tower of a cottage near the pub where Jury and his cronies are dining one night. Then the dead woman s estranged husband is killed as well. Four deaths two in the past, two that occur on the pages of this intricate, compelling novel keep Richard Jury and his sidekick Sergeant Wiggins running from their homes in Islington to the countryside in Devon and to London as they try to figure out if the deaths were accidental or not. And, if they are connected. Witty, well-written, with literary references from Thomas Hardy to Yeats, "Vertigo 42" is a pitch perfect, page-turning novel from a mystery writer at the top of her game."

It'sbeen four years since I had a chance to delight in the company ofSuperintendent Richard Jury of Scotland Yard and I'm so glad he's back. Heand his colleagues are grand companions. Once again, Martha Grimes has writtena whodunit with terrific characters and a grand plot mixed with her uniquedroll wit. Vertigo 42 is one smart mystery!--Susan Isaacs, bestselling author of The Goldberg Variations

Four years is much too long to go without a wonderfully loopy Martha Grimes mystery featuring her Scotland Yard detective, Superintendent Richard Jury, and his eccentric friends and their dogs. A forlorn Staffordshire terrier named Stanley makes an appearance in Vertigo 42, as do a winsome stray named Joey and some unnamed pit bulls victimized in a cruel dogfighting racket operating under the radar in London. Hurting an animal is like betraying a friend to Grimes, who draws on literature to develop her themes of friendship and loyalty and extend them to Jury s murder case.--Marilyn Stasio "The New York Times ""

It's been four years since I had a chance to delight in the company of Superintendent Richard Jury of Scotland Yard and I'm so glad he's back. He and his colleagues are grand companions. Once again, Martha Grimes has written a whodunit with terrific characters and a grand plot mixed with her unique droll wit. Vertigo 42 is one smart mystery!--Susan Isaacs, bestselling author of The Goldberg Variations

Like all great satirists, Ms. Grimes sees the world from the other side of the looking glass and invites us to come along for a wild and wacky ride. --Nelson DeMille, bestselling author of The Panther

Bestselling author Martha Grimes is the author of more than thirty books, including twenty-two Richard Jury mysteries. She is also the author of Double Double, a dual memoir of alcoholism written with her son. The winner of the 2012 Mystery Writers of America Grandmaster Award, Grimes lives in Bethesda, Maryland.