Items related to The Map of Salt and Stars

Joukhadar, Zeyn The Map of Salt and Stars

The Map of Salt and Stars 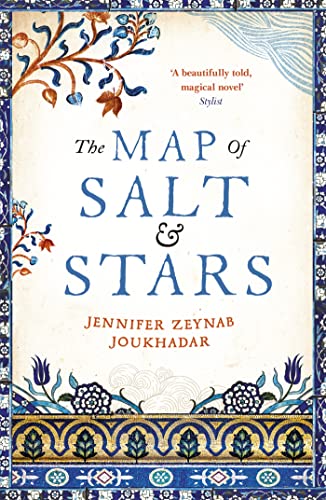 In 2011, the peace of the Syrian city of Homs is disturbed by protests and shelling. A young girl, Nour, is forced to flee across the Levant and North Africa in search of safety.

800 years before, Rawiya, disguised as a boy and apprenticed to a famous map maker, set out on an epic quest to chart the globe, following the very same route.

In The Map of Salt & Stars, the tales of these two heroines coming of age in perilous times interweave, and shine a light on a country in turmoil, human resilience and the power of stories.

Full of tension and love and danger. This is a beautifully told, magical novel about journeys and finding your way home. (STYLIST)

The interweaving of the two stories is skilfully done... Joukhadar can be congratulated on an unusual first novel. (MAIL ON SUNDAY)

A gorgeous and timely story (THE ARAB DAILY NEWS)

Joukhadar's prose is like a dream, which is fitting for this pair of stories, one drawn from fantastical legend, the other from nightmarish current events from which Syria has yet to awaken. (SEATTLE TIMES)

A spellbinding geography of family and hope. (SHELF AWARENESS)

After the death of her beloved father, imaginative 11-year-old Nour leaves New York City, where she was born, and returns home with her cartographer mother and two older sisters to the family's native Syria, where bombs released by Assad's forces soon destroy their home and send them on a desperate flight across North Africa. More than 800 years earlier, Rawiya, the daughter of an impoverished widow, disguises herself as a boy and leaves medieval Ceuta-modern Spain's foothold on the African coast-and apprentices herself to a mapmaker, traveling with him throughout the Levant. The stories are deftly interwoven, for Nour's father has told her about Rawiya's fabulous, sometimes mythic adventures. Parallels abound, from the spunky, triumphant heroines to mapmaking as a key to finding oneself to the special stone Nour hunts, once the eye of a terrifying winged creature battled by Rawiya. Debut novelist Joukhadar gracefully balances the gritty, often horrific truth of the refugee's plight with the lyrical near-fairy tale she has created (in both time periods), layered with burnished hope and occasionally overplayed sentiment.

The Map of Salt and Stars presents an Arab world in full possession of its immense historical and cultural biography, marred by its modern tragedies but not exclusively defined by them. (BOOK PAGE)

This imaginative yet very real look into war-torn Syria is a must. (BOOK LIST ONLINE)

A very good book, and an important, eye-opening one too. (INTERZONE) Book Description:

For fans of The Kite Runner, a magical yet very moving story of one young Syrian girl's journey to find her way home.

1. MAP OF SALT AND STARS

2. The Map of Salt and Stars