Items related to Alienation and Freedom 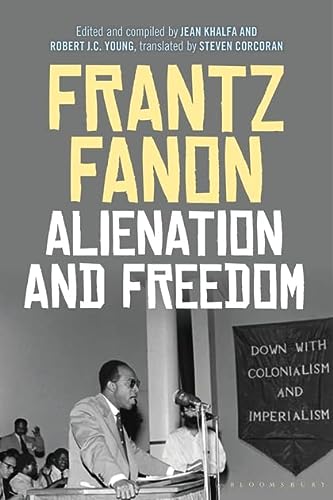 Since the publication of The Wretched of the Earth in 1961, Fanon's work has been deeply significant for generations of intellectuals and activists from the 60s to the present day.

Alienation and Freedom collects together previously unpublished works comprising around half of his entire output - which were previously thought to be lost or inaccessible. This book introduces audiences to a new Fanon, a more personal Fanon and one whose literary and psychiatric works, in particular, take centre stage. These writings provide new depth and complexity to our understanding of Fanon's entire oeuvre revealing more of his powerful thinking about identity, race and activism which remain remarkably prescient. Shedding new light on the work of a major 20th-century philosopher, this disruptive and moving work will shape how we look at the world.

We must thank Jean Khalfa and Robert Young for this precious compendium. It overflows with possibility and will do more than merely transform scholarly understanding of Fanon's work and life. Here, at last, is the means to surpass the caricatures and undo all the bad faith that has passed for too long as both criticism and exposition of his revolutionary humanist ethics, his epistemology and his politics. A new era of Fanon studies begins now. - Paul Gilroy, Professor of American and English Literature at King's College London, UK, author of 'There Ain't No Black in the Union Jack'

The demand has been there for years: More, Fanon, give us more! Well, here it is. This collection of formerly unpublished writings achieves that task with beauty and breadth. Jean Khalfa and Robert J.C. Young's erudite, lucid analyses and commentaries contextualizing the selections, and other gems, including correspondence on publishing his works and a catalog of Fanon's library. There is much here not only for scholars but anyone interested in learning more about and from this great revolutionary thinker and fighter for the causes of dignity and freedom. - Lewis R. Gordon, author of 'What Fanon Said: A Philosophical Introduction to His Life and Thought'

The publication of Alienation and Freedom is one of the most significant intellectual achievements in the last half century. The volume reaffirms Frantz Fanon's status as a leading twentieth-century philosopher, psychiatrist, decolonial theorist, and revolutionary. It also reveals a lesser-known Fanon, a Fanon whose previously unpublished works of poeticism and historicism concern themselves with the myriad ways in which we may discern and express the meaning of freedom. The book is brilliant and the editing of Jean Khalfa and Robert J.C. Young superb. - --Neil Roberts, author of 'Freedom as Marronage' and President of the Caribbean Philosophical Association

The first intimate look at Frantz Fanon's brilliance and wide-ranging interests, this volume gives us the full range of his gifts as a playwright, an innovative psychiatrist fully aware of the importance of his theories, and a committed political philosopher. The last section (on his library) lets us share the full intensity of his whole intellectual trajectory one that influenced the course of decolonial thinking on all continents. Editors Jean Khalfa's and Robert Young's painstaking work is a publishing event and an indispensable resource for anyone interested in understanding alienation and the search for social justice. - Francoise Lionnet, Professor of Romance Languages and Literatures, Comparative Literature, and African and African American Studies, Harvard University, USA

In Alienation and Freedom, Jean Khalfa and Robert J.C Young, two of the world's leading scholars of contemporary thought and postcolonial studies, transport us on an off-road adventure, challenging us at every turn to navigate the treacherous terrain of colonialism, global black consciousness, identity, philosophy, psychiatry, and race, hallmarks of the pioneering writings of Frantz Fanon. Including many previously unavailable or inaccessible essays, this book further confirms Fanon's status as a major global thinker whose insights, the lasting resonance of which, remain of crucial importance to 21st century society. - --Dominic Thomas, Letessier Professor of French, University of California, Los Angeles, USA

This text compels us towards a more complete understanding of the thinking of Franz Fanon. This is an impressive array of materials, many unpublished before, which will be absolutely essential to a new generation of scholars and general readers of Fanon. - Carole Boyce Davies, Professor of Africana Studies and English, Cornell University, USA

Here are collected two plays never published before, written when he was a medical student; scientific papers reminded us of his career as a psychiatrist; newly discovered pieces he wrote, often anonymously in El Moudjahid, the organ of the National Liberation Front that led Algeria to independence. But this volume is certainly not a collection of disparate additional pieces from an author whose oeuvre is already complete. On the contrary this book by Frantz Fanon forms a unity: like the rest of the works by the author of the Wretched of the Earth it tells in a unique way the story of the emancipation of the human being from everything that alienates her, everything that separates her from her humanity. Thus it sheds a new light on Frantz Fanon. - --Souleymane Bachir Diagne,Professor of Philosophy, Columbia University, USA

Frantz Fanon (1925-1961) was a Martinique-born psychiatrist, philosopher, revolutionary, and writer. He was the author of classic works such as Black Skin, White Masks (1952) and The Wretched of the Earth (1961). He was one of the most significant anti-colonialist, anti-imperialist and anti-racist thinkers of the 20th Century.

Jean Khalfa is a Senior Lecturer in French Studies at Trinity College Cambridge, UK. He is the editor of the first complete edition of Michel Foucault's History of Madness (2006) and author of Poetics of the Antilles (2016) and an upcoming work on Frantz Fanon's The Wretched of the Earth.

Steven Corcoran is a writer and translator living in Berlin. He has edited and translated several works by Jacques Rancière, including Dissensus (2015) and The Lost Tread (2016).

Book Description Hardcover. Condition: New. Hardcover. Since the publication of The Wretched of the Earth in 1961, Fanon's work has been deeply significant for generations of intellectuals and activists from the 60s to the present day.Alienati.Shipping may be from multiple locations in the US or from the UK, depending on stock availability. 416 pages. 1.287. Seller Inventory # 9781474250214