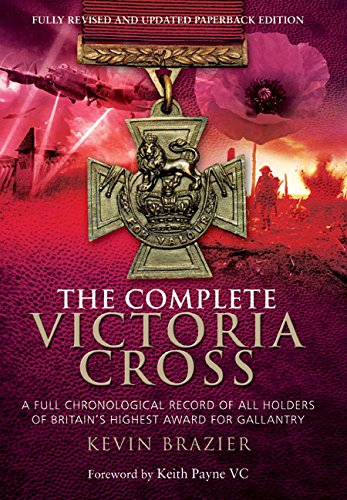 This fully revised paperback edition of the complete chronological record of VC holders is an essential work of reference for every student of military history. All the British and Commonwealth servicemen who have been awarded the highest honour for exceptional acts of bravery and self-sacrifice are commemorated here. The first VCs awarded for the Crimean War and in the nineteenth-century colonial wars are described, as are the VCs awarded in the world wars of the twentieth century and the most recent VCs awarded during present-day conflicts in Iraq and Afghanistan. The extraordinary exploits recounted in this fascinating book make unforgettable reading. 'A fascinating new book, by historian Kevin Brazier, lays out the best evidence to date. The Complete Victoria Cross lists for the first time in chronological order every VC, with an account of the action(s) for which it was won, the location of every medal where known, and likewise the last resting place of the VC holder.' ...The Times 'A wealth of information, all of which makes this a valuable reference source. Everyone, whether they have an interest or not in military history, would find this book thoroughly absorbing.'...Britain at War 'The chronological arrangement of this book is very effective, weaving together the individual VC stories to produce a picture of the changing nature of warfare since 1956 and the unchanging nature of bravery. ' ...History of War 'This book is a must for anyone interested in the Victoria Cross, whether they have a recent interest in the VC or have been interested in the long term.'...Victoria Cross Forum

"This is a very useful addition to the ever-expanding library of VC literature. It is a full chronological record of all holders of the Cross complete with brief citations. burial locations and present locations of the VC. There is also an alphabetical list of the recipients. An excellent reference book."--Victoria Cross Society

Kevin Brazier has investigated the lives, careers and military exploits of all 1358 VC holders in order to compile this unique book. He has long been intrigued by medals and medal recipients, in particular by the VC, Britain's highest award for gallantry. His other books include The Complete George Cross and The Complete Blue Max.

1. The Complete Victoria Cross: A Full Chronological Record of All Holders of Britain?s Highest Award for Gallantry

Book Description Pen and Sword Military, 2015. Condition: Good. A+ Customer service! Satisfaction Guaranteed! Book is in Used-Good condition. Pages and cover are clean and intact. Used items may not include supplementary materials such as CDs or access codes. May show signs of minor shelf wear and contain limited notes and highlighting. Seller Inventory # 1473843510-2-4

2. The Complete Victoria Cross: A Full Chronological Record of All Holders of Britainâ s Highest Award for Gallantry

Book Description Pen and Sword Military, 2015. Paperback. Condition: VERY GOOD. Pages are intact and are not marred by notes or highlighting, but may contain a neat previous owner name. The spine remains undamaged. Seller Inventory # 1473843510_abe_vg