Scarrow, Simon The Blood of Rome (Eagles of the Empire 17)

The Blood of Rome (Eagles of the Empire 17) 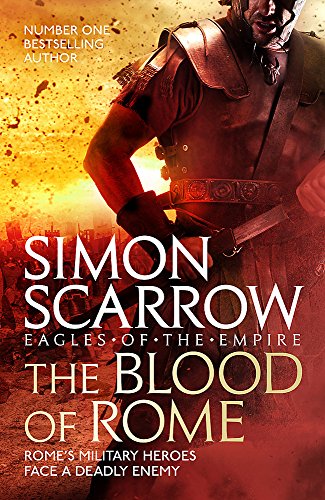 The gripping new Cato and Macro adventure in Simon Scarrow's bestselling Eagles of the Empire series, not to be missed by readers of Conn Iggulden and Bernard Cornwell.

It is AD 55. As trouble brews on the eastern fringes of the Roman Empire, Tribune Cato and Centurion Macro must prepare for war . . .

The wily Parthian Empire has invaded Armenia, a frontier territory claimed by Rome, ousting King Rhadamistus. The king is ambitious and ruthless, but he is vital to Rome's strategic interests. General Corbulo must restore him to power, while also readying the troops for war with the powerful Parthian Empire. Corbulo orders new arrivals Cato and Macro, and their elite cohort of Praetorian Guards, to carry out the task.

Marching into unmapped and unfamiliar terrain to restore an unpopular king is a perilous mission. Allies cannot be trusted and foes lurk on all sides. The bravery and skill of the Roman army will be tested to the limit . . .

I really don't need this kind of competition... It's a great read (Bernard Cornwell)

Blood, gore, political intrigue, gripes, fears - ah, coming back to Scarrow's Eagles of Empire series is like a family homecoming in front of a warm fire... A historical fiction thriller that'll have you reaching for your gladius (Daily Sport)

The Eagles of the Empire series marches on with the brilliantly told adventures of Cato and Macro... Roman soldiering at its very best - even by Scarrow's high standards (Sunday Sport)

A rip-roaring read (Mail on Sunday)

An action-packed new novel of military action, outstanding courage and camaraderie, taking Tribune Cato and Centurion Macro to the eastern fringes of the Roman Empire in THE BLOOD OF ROME, from the Sunday Times-bestselling author of DAY OF THE CAESARS.

The Blood Of Rome :