Items related to Barbarians: Rebellion and Resistance to the Roman Empire

Barbarians: Rebellion and Resistance to the Roman Empire 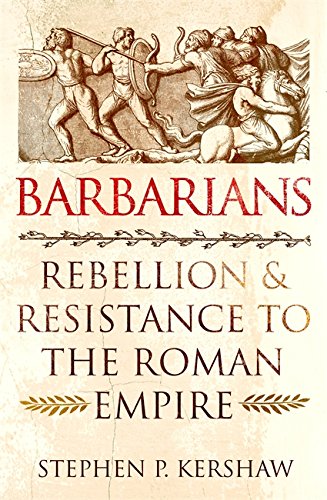 History is written by the victors, and in the case of Rome the victors also had some extremely eloquent historians. Rome's history, as written by the Romans, follows a remarkable trajectory from its origins as a tiny village of refugees from a conflict zone, to a dominant superpower, before being transformed into the Medieval and Byzantine worlds.

But throughout its rise and fall Rome faced resistance and rebellion from peoples which it regarded as barbarous and/or barbarian. These opponents of Rome's power left little in the way of their own first-hand historical accounts, but they had great deal of impact on the imaginations of the Romans, and of later ages. Resisting from outside the borders, or rebelling from within, they emerge vividly in Rome's historical tradition, and have a significant footprint in the archaeology. This new history takes a fresh and original viewpoint of Rome, building its narrative around the lives, personalities, successes and failures both of the key opponents of Rome's rise and dominance, and of the ones who ultimately brought the empire down.

The book presents a selection of portrait-histories of Africans, Britons, Easterners, Egyptians, Gauls, Germans, Goths, Huns, Vandals and others which can be read individually as stand-alone pieces or collectively as a narrative 'barbarian' history of Rome. These will be based both on ancient historical writings and modern archaeological research.

Praise for the author's A Brief Guide to the Greek Myths:
Eminently sane, highly informative, and reasonably priced.

Praise for the author's A Brief History of Atlantis:
As his exhaustive survey shows, Atlantis has been adapted to countless ideologies and agendas over time, serving the needs of every sort of reader - "harmless hippies or Heinrich Himmler", in Mr Kershaw's memorable phrase.

Praise for the author:
The experts interviewed (a diverse bunch that includes academics, military leaders, civil-rights figures and more) [for TV documentary series Barbarians Rising] are both entertaining and illuminating, framing the barbarian cause, broadly, as a struggle for freedom against an iron-fisted opponent with unparalleled resources.

A fresh new look at the Roman Empire, from the point of view of those regarded by the Romans as 'barbarians'. Kershaw builds a narrative around the lives, personalities, successes and failures both of the key opponents of Rome's rise and dominance, and of the those who ultimately brought the empire down.

1. Barbarians: Rebellion and Resistance to the Roman Empire

2. Barbarians: Rebellion and Resistance to the Roman Empire

3. Barbarians: Rebellion and Resistance to the Roman Empire

Book Description Little Brown Books Group Expor Mai 2019, 2019. Buch. Condition: Neu. Neuware - 'And now what will become of us without barbarians Those people were a sort of solution.' Englisch. Seller Inventory # 9781472142115