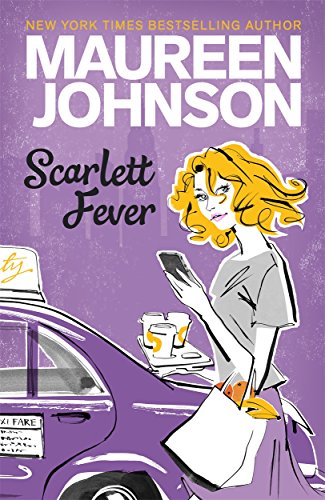 Quite a bit has changed for Scarlett Martin over the last month. Mrs Amberson has moved down the street and opened the Amy Amberson Agency (AAA, frequently called by stranded motorists), and she's taken on Scarlett as her official assistant. Marlene seems to have had a personality transplant (she's being nice, for once), Spencer has accidentally become public enemy number one (his character murdered another very popular one on a hit show), and there is definitely something wrong with Lola. And as for Scarlett's love life? Well ...the less said about that the better. That would be enough for anyone to deal with, but unfortunately two new figures are about to enter Scarlett's life: fifteen-year-old Broadway star Chelsea Biggs and her brother Max. Suddenly, drama appears to have spread over all of New York City. Gossip pages, boys standing in trashcans, an ill-fated cake, murder on the steps of a courthouse, flying doughnuts, topiary abuse, a dog named Murray who wees whenever he sees hats ...and then an event that will change the Martin family forever. One thing is for sure: there's never a dull moment at the Hopewell Hotel.

Maureen Johnson was crowned the 2012 Queen of Teen in the UK - but, as it turns out, she is American. She was born in Philadelphia, Pennsylvania, during a massive snowstorm. After a little dalliance with astronomy (she had a glow-in-the-dark star chart) and archaeology (she had a little shovel), Maureen declared her intention to become a writer at the age of eight or nine or so.

She is a New York Times bestselling author of ten YA novels (including SUITE SCARLETT, SCARLETT FEVER, THE KEY TO THE GOLDEN FIREBIRD, 13 LITTLE BLUE ENVELOPES, THE NAME OF THE STAR and THE MADNESS UNDERNEATH). She has also written many collaborative works, such as LET IT SNOW (with John Green and Lauren Myracle), and THE BANE CHRONICLES (with Cassandra Clare and Sarah Rees Brennan). She writes frequently on the subject of Young Adult literature for many publications, and is well known for her online presence on Twitter (@maureenjohnson). Maureen lives in New York, and online on Twitter (or at www.maureenjohnsonbooks.com), and was selected to represent the YA category for World Book Day 2014 with the short story THE BOY IN THE SMOKE. She's not giving that crown back.