Items related to The Book of Dreams

George, Nina The Book of Dreams

The Book of Dreams 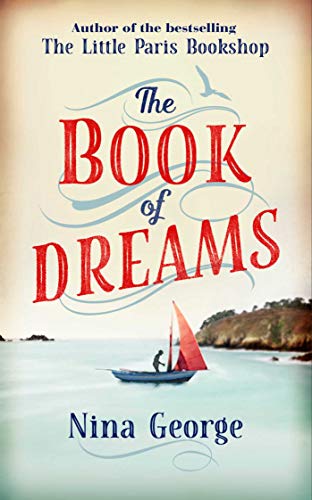 From the New York Times and internationally bestselling author of The Little Paris Bookshop, comes a delightful, offbeat, charming and bittersweet tale about the distance one man will travel for the sake of love and friendship.

Henri is about to meet his teenage son, Sam, for the first time. But as Henri crosses Hammersmith Bridge, an accident happens. Sam reads about it in the newspaper - his father is a hero, now in a coma in hospital. So their first meeting takes place there, alongside the hospital’s neurologist, whom the staff name God and is the first person to treat Sam as an equal in intelligence. And that’s because Sam, due to a condition called synaesthesia, can sense things the doctors can’t - he can see the colours of his father’s thoughts and dreams, and many relationships build from this.

This beautiful novel is warm, wise, wry look at what love means. It’s about fathers and sons, friendship and family, life, death and making peace with the past in order to find a future.

‘This charming tale is already a bestseller in Germany. For fans of Like Water for Chocolate and Amelie’Red

‘Glowing . . . layered with wit, enchanting writing and a love of books’ Daily Mail

‘A captivating curiosity, for those who still believe in love and books, friendship and food, happiness and romance’ Saga

‘A capricious, meandering journey of love, loss and wonderful food, so beautifully described. I enjoyed every moment’ Carole Matthews

‘If you're looking to be charmed right out of your own life for a few hours, sit down with this wise and winsome novel . . . Everything happens just as you want it to . . . from poignant moments to crystalline insights in exactly the right measure’ oprah.com

'An enchanting, uplifting read . . . the sort of book that acts as a soothing tonic as you read' Independent

Born 1973 in Bielefeld, Germany, Nina George is a prize-winning and bestselling author ("Das Lavendelzimmer" – "The Little Paris Bookshop") and freelance journalist since 1992, who has published 26 books (novels, mysteries and non-fiction) as well as over hundred short stories and more than 600 columns. George has worked as a cop reporter, columnist and managing editor for a wide range of publications, including Hamburger Abendblatt, Die Welt, Der Hamburger, "politik und kultur" as well as TV Movie and Federwelt. Georges writes also under three pen-names, for ex "Jean Bagnol", a double-andronym for provence-based mystery novels. In 2012 and 2013 she won the DeLiA and the Glauser-Prize. In 2013 she had her first bestselling book "Das Lavendelzimmer", translated in 27 langues and sold more than 500.000 copies. In November 2011, Nina George established the "JA zum Urheberrecht" (YES on Author's Rights) initiative, which supports the rights of authors, artists and entertainers and is dedicated to resolving issues within the literary community as well as establishing fair and practical rights-license models for the web-distribution. 14 writers' associations and 27 publishing partners have since joined the JA...-Initiative. George supports the "Initiative Urheberrecht" (Author's Rights Initiative―www.urheber.info) as well as the "gib 8 aufs Wort"-campaign of the VG Wort. In August 2014 George initiated the Amazon-protest in Germany www.fairer-buchmarkt.de, where overs 2000 germanspeaking authors – Nobelprizewinnig Elfriede Jelinek or Bestsellingauthor Nele Neuhaus – sign an open letter to Jeff Bezos and Amazon, protesting against the banned-book-methods of the giant retailer in the Hachette/Bonnier-dispute. In 2015 George is the founder of the Initiative Fairer Buchmarkt e.V., which supports questions of law in daily business of authors – for ex in contracts, fees or author's rights and e-Business. George is Member to PEN, Das Syndikat (association of German-language crime writers), the Association of German Authors (VS), the Hamburg Authors' Association (HAV), BücherFrauen (Women in Publishing), the IACW/AIEP (International Association of Crime Writers), the GEDOK (Association of female artists in Germany), PRO QUOTE and Lean In. Nina George sits on the board of the Three Seas Writers' and Translaters' Council (TSWTC), whose members come from 16 different countries. Nina George teaches writing at Literaturbüro Unna, Alsterdamm Kunstschule, Wilhelmsburger Honigfabrik, where she coaches young people, adults and professional authors. George also moderates (bilingual) readings and works as a speaker. www.nina-george.com

1. The Book of Dreams

Book Description Condition: Very Good. Ships from the UK. Used book that is in excellent condition. May show signs of wear or have minor defects. Seller Inventory # 37621521-20

2. The Book of Dreams

Book Description Condition: Good. Ships from the UK. Former library book; may include library markings. Used book that is in clean, average condition without any missing pages. Seller Inventory # 18059699-20

3. The Book of Dreams

Book Description Paperback. Condition: Very Good. The book has been read, but is in excellent condition. Pages are intact and not marred by notes or highlighting. The spine remains undamaged. Seller Inventory # GOR009752174

4. The Book of Dreams

Book Description Condition: Very Good. This book is in very good condition and will be shipped within 24 hours of ordering. The cover may have some limited signs of wear but the pages are clean, intact and the spine remains undamaged. This book has clearly been well maintained and looked after thus far. Money back guarantee if you are not satisfied. See all our books here, order more than 1 book and get discounted shipping. . Seller Inventory # 7719-9781471168338

5. The Book of Dreams

Book Description Hardcover. Condition: Very Good. Shipped within 24 hours from our UK warehouse. Clean, undamaged book with no damage to pages and minimal wear to the cover. Spine still tight, in very good condition. Remember if you are not happy, you are covered by our 100% money back guarantee. Seller Inventory # 6545-9781471168338

6. The Book of Dreams

Book Description Condition: Good. A+ Customer service! Satisfaction Guaranteed! Book is in Used-Good condition. Pages and cover are clean and intact. Used items may not include supplementary materials such as CDs or access codes. May show signs of minor shelf wear and contain limited notes and highlighting. Seller Inventory # 1471168336-2-4