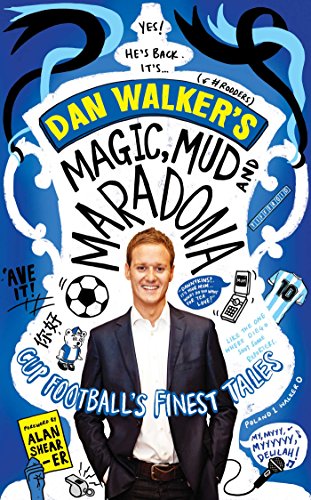 There's something special about cup football, and Dan Walker has had a privileged seat for some of football's greatest knockout dramas, getting close to the action in World Cups and FA Cups. Who wouldn't want to play a knockabout game of beach football on Copacabana beach with Clarence Seedorf? But there have also been moments when things haven't quite gone according to plan, as when he rubbed out the names on Wrexham's honours board live on Football Focus, or when he was halfway up the famous Wembley arch on FA Cup final day, only to be interrupted by his mum ringing him up to ask what he wanted for his tea.
Dan's own personal highlights reel are a jumping-off point for some of the funniest and most bizarre football stories of cup success and failure, from the most outrageous dressing-room dust-ups to Maradona's greatest rants. Then there's those moments that show footballers in a new light, such as Ipswich Town's Paul Anderson, who paid to repair a fan's ceiling after the fan punched a hole in it  when celebrating a vital goal scored by Anderson. Packed with brilliant photographs, and told in Dan's unique style, the book also features a collection of his hugely popular team line-ups to make this the perfect gift for football fans everywhere.

Dan Walker is the presenter of BBC1's long-running Saturday lunchtime show Football Focus, and also anchors BBC Breakfast. His first book, Dan Walker's Football Thronkersaurus, was a nationwide hit and sold out in Sheffield, but that was only because his wife, with whom he has three beautiful children, bought every copy in the city.

Book Description Condition: Very Good. This book is in very good condition and will be shipped within 24 hours of ordering. The cover may have some limited signs of wear but the pages are clean, intact and the spine remains undamaged. This book has clearly been well maintained and looked after thus far. Money back guarantee if you are not satisfied. See all our books here, order more than 1 book and get discounted shipping. . Seller Inventory # 7719-9781471136313

Book Description Condition: Very Good. Shipped within 24 hours from our UK warehouse. Clean, undamaged book with no damage to pages and minimal wear to the cover. Spine still tight, in very good condition. Remember if you are not happy, you are covered by our 100% money back guarantee. Seller Inventory # 6545-9781471136313

Book Description Hardcover. Condition: Very Good. Very Good: a copy that has been read, but is in excellent condition. Pages are intact and not marred by notes or highlighting. The spine remains undamaged. Most items will be dispatched the same or the next working day. Seller Inventory # wbb0017068429

Book Description Hardcover. Condition: Good. Ex-Library Book. Has usual library markings and stamps inside. All orders are dispatched the following working day from our UK warehouse. Established in 2004, we have over 500,000 books in stock. No quibble refund if not completely satisfied. Seller Inventory # mon0005513410

Book Description Hardcover. Condition: Very Good. All orders are dispatched the following working day from our UK warehouse. Established in 2004, we have over 500,000 books in stock. No quibble refund if not completely satisfied. Seller Inventory # mon0005565687

Book Description Hardcover. Condition: Used; Good. **Simply Brit** Shipped with Premium postal service within 24 hours from the UK with impressive delivery time. We have dispatched from our book depository; items of good condition to over ten million satisfied customers worldwide. We are committed to providing you with reliable and efficient service at all times. Seller Inventory # 2125708

Book Description Hardcover. Condition: Used; Good. **SHIPPED FROM UK** We believe you will be completely satisfied with our quick and reliable service. All orders are dispatched as swiftly as possible! Buy with confidence! Greener Books. Seller Inventory # 2439856

Book Description Hardcover. Condition: Used; Good. Dispatched, from the UK, within 48 hours of ordering. This book is in good condition but will show signs of previous ownership. Please expect some creasing to the spine and/or minor damage to the cover. Seller Inventory # CHL2321514