Items related to The Marian Writings of St. Robert Bellarmine 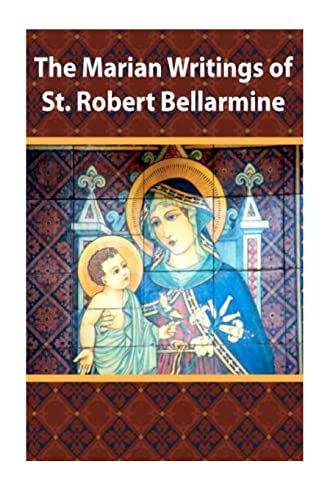 In the 16th century, the Holy Spirit raised up St. Robert Bellarmine to defend the Church which was under severe attack.

He was so good at defending the Church’s teachings, that anti-Catholics set up “chairs of theology” specifically to fight against him. He was their biggest opponent. And they couldn’t beat him.

Pope Clement VIII made him a cardinal, and said about him: “The Church of God has not his equal in learning.

He was especially good at defending the privileges of the Blessed Virgin, which are still under attack today.

Perhaps you’ve met people who say all kinds of nonsense about the Blessed Virgin, but didn’t know the right responses.

Well, those days are over, because I’m fortunate enough to own St. Robert’s Opera Omnia (his Latin Collected Works). I went through each volume – of several hundred pages each – and collected his Marian passages. And I’ve translated them, and put them all into one handy volume for you.

What’s more, I’ve also translated the section about him on the Marian devotion of the Saints from the Summa Aurea de Laudibus Virginis Mariae. This biographical material has never appeared in English.

So, for the first time, you get to see how this Doctor of the Church lived his own devotion to Mary.

“The Marian Writings of St. Robert Bellarmine” shows you...

1. How you can confidently defend Mary

2. The only defense of the Salve Regina (Hail Holy Queen)

4. The rock-solid defenses he used to defend Mary’s other privileges

5. Previously untranslated passages from the Fathers of the Church, which he used in his defense of Catholic doctrine. (As you can imagine, St. Robert was very well-versed in the writings of the Fathers.)

6. And as a bonus, you also get his Marian sermons, which reveal such rich information about the Blessed Mother.

All this is only a taste of what you get.

And you’ll save tons of time in boosting your Marian apologetics skills, because St. Robert’s writing style is clear and concise. Your progress will seem effortless. No cut corners. No wasted words.

Pope Clement VIII said about St. Robert Bellarmine, “The Church of God has not his equal in learning.”

So, would it be fair to say you’d be much better off owning “The Marian Writings of St. Robert Bellarmine”?

Click the “ADD TO CART” button now at the top right-hand corner of this page, because things put off until later are often not done at all.

Let “The Marian Writings of St. Robert Bellarmine” be of real service to you. Remember, it’s covered by a 30-day guarantee that protects you against disappointment.

Book Description Paperback. Condition: New. Language: English. Brand new Book. "The Easy Way To Skyrocket Your Skills In Marian Apologetics And Devotion To Mary"When Pope Clement VIII made St. Robert Bellarmine a cardinal, he said: "The Church of God has not his equal in learning."St. Robert was a prolific writer. The collection of his Opera Omnia (Collected Works) which I have is sixteen huge volumes of several hundred pages each.He wrote on every aspect of Catholic doctrine. This book is a collection of his Marian writings taken from all of those volumes, and put into one handy resource.As you may know, St. Peter says: "Always be ready to give an explanation to anyone who asks you for a reason for your hope" (1 Pt. 3:15).This collection of St. Robert's Marian writings helps Marian devotees like you easily respond to any attacks on Marian doctrine and devotion.Here's a sample of what you get: 1. St. Robert's detailed explanation and defense of the Salve Regina (Hail Holy Queen). Whereas, in "The Glories of Mary", St. Alphonsus Liguori explained the Salve Regina from a devotional perspective, St. Robert explains it in terms of Marian apologetics.2. The bulletproof arguments St. Robert used to defend Mary's Immaculate Conception centuries before it was solemnly defined by the Church.3. Plus, the rock-solid defenses he used to defend Mary's other privileges.4. Previously untranslated passages from the Fathers of the Church, which he used in his defense of Mary's privileges and other Catholic doctrines. (A number of these Patristic texts are coming to light with the translation of this book. And they help accelerate your progress.)5. His Marian sermons, which reveal such rich information about the Blessed Mother.What's more, you get previously untranslated biographical information about St. Robert from the "Summa Aurea de Laudibus Virginis Mariae", showing how he lived his own devotion to Mary.With "The Marian Writings of St. Robert Bellarmine", you'll be confident, smart, and ready to take on anyone, anywhere, anytime in Marian apologetics.To repeat what you read above, when Pope Clement VIII made St. Robert a cardinal, he said, "The Church of God has not his equal in learning."The Marian Writings of St. Robert Bellarmine" is so crammed full of brilliant, proven defenses of Mary's privileges, that I am certain you will find in it the key to skyrocket your Marian apologetics and devotion. You don't risk a penny by trying it out.Send today for your 30-day trial copy of "The Marian Writings of St. Robert Bellarmine". If, for any reason, you should be dissatisfied with the book, just return it for a fast refund. No questions asked.To get your copy, just scroll up now and click the Buy Now button on the right. It's that easy. Seller Inventory # APC9781470018511

Book Description Paperback. Condition: new. Paperback. "The Church of God has not his equal in learning." - What Pope Clement VIII said about St. Robert Bellarmine when he made him a Cardinal Have you ever felt helpless when trying to defend the Blessed Virgin to others? Have you ever been tongue-tied, because the right responses never came to your lips? Since the Immaculate Conception is part of the deposit of faith, have you ever wondered how Catholics defended it before it was solemnly defined in 1854? Or what about when the perpetual virginity of Mary and her other privileges are attacked? You know there are right answers, but you feel embarrassed because you don't know them. Well, now you have the opportunity to find the solutions by sitting at the feet of St. Robert Bellarmine, Doctor of the Church, and the most learned man in the Church during his lifetime. Because he shows you. "How To Become A Master Of Marian Apologetics" If you've ever wanted to raise your skills in Marian apologetics to a much higher level. and. at an accelerated pace. and. if you're interested in seeing some previously untranslated information about how a Saint and Doctor of the Church lived his devotion to Mary, then you're going to be delighted with this. Here's what this is all about. This little book, "The Marian Writings of St. Robert Bellarmine" , presents, for the first time, all of his Marian works in one convenient volume. These writings were taken from the many volumes and thousands of pages of his Opera Omnia (Collected Works). In its clearly written pages, you'll discover. 1. How you can defend Mary with great confidence. 2. The only defense of the Salve Regina (Hail Holy Queen). 3. Bulletproof arguments St. Robert used to defend Mary's Immaculate Conception centuries before it was solemnly defined by the Church. 4. The rock-solid defense he used to defend Mary's other privileges. 5. Previously untranslated passages from the Fathers of the Church, which he used in his defense of Catholic doctrine. (St. Robert was very well-versed in the writings of the Fathers.) 6. His Marian sermons, which reveal such rich information about the Blessed Mother. This is only a taste of what you get. And if you want to see how a Saint and Doctor of the Church lived his own devotion to Mary, then check out the beginning of this book, because it contains previously untranslated biographical material about St. Robert's life, specifically. how he lived his devotion to Mary. So, you not only get to discover what he taught about Mary, but also how he lived his devotion to her. You get the best of both worlds. And you won't find this biographical information anywhere else. You see, you'll save tons of time in boosting your Marian apologetics skills, because St. Robert's writing style is clear and concise, which makes your progress seem effortless. No cut corners. No wasted words. Jesus said: "But I say unto you, on the day of judgment, people will render an account for every idle word they speak. For by your words you will be justified, and by your words you will be condemned" (Mt. 12:36-37). And so, I'm conscious of my grave responsibility before God, and I'm very well aware that one day I will stand alone before the just Judge, and have to render a strict account for every word I've written about this book and the others I sell here on Amazon. The fact is, because of my own salvation, you can be absolutely sure that what I've written about this book is 100% true. And you should expect no less from a Marian devotee. So there you have it. You can clearly see that whereas you have nothing to lose, I have everything to lose if I'm not truthful. The risk is 100% on me. It's that simple. So order your copy today. This item is printed on demand. Shipping may be from multiple locations in the US or from the UK, depending on stock availability. Seller Inventory # 9781470018511