Items related to Shedding the Layers: How Ayahuasca Saved More Than...

Flaherty, Mark Shedding the Layers: How Ayahuasca Saved More Than My Skin

Shedding the Layers: How Ayahuasca Saved More Than My Skin 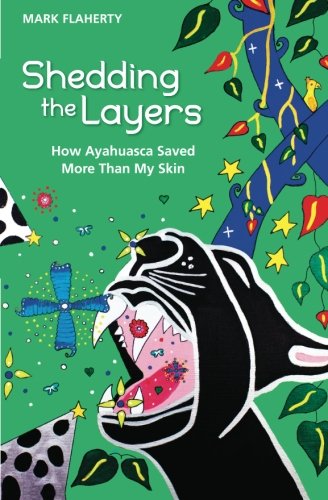 “As the power of fear and hatred threatens to drive me back over the edge, I desperately try to focus on the positive. The harder I try, the faster my head vibrates, about to explode...Something suddenly cracks, followed by a rushing sound... I vomit again and again. The stench of death fills the air.

Seconds later, the purest peace I’ve ever felt fills my body. I open my eyes and see the world for the first time, as it really is: pristine, beautiful and perfect...”

Thirty-year-old computer programmer Mark Flaherty’s world is turned upside down when he is diagnosed with an incurable illness, and a voice within insists the answer lies with ayahuasca—a sacred, visionary plant medicine.

Flaherty leaves his native England to live among the shamans of the Peruvian Amazon where he participates in hundreds of ayahuasca ceremonies. What he discovers about himself and the nature of existence is as shocking as it is inspiring.

This captivating true story of a man’s fight to heal himself demonstrates that anything really is possible and everything does happen for a reason.

"Flaherty reminds us that living from the heart is not just the only path worth taking, it's the only real medicine." - Adam Elenbaas, author of "Fishers of Men: The Gospel of an Ayahuasca Vision Quest," and contributing editor at RealitySandwich.com

In 2004, Mark was diagnosed with severe eczema. With his body oozing and covered in sores and his skin falling off in chunks, Western doctors could do nothing to stop the progression of the disease. As a last resort, he moved to the Peruvian Amazon to live among ayahuasca shamans. Shedding the Layers tells the story of his time there, and how he went from being a sceptic to understanding that there is so much more to life than he ever thought possible. Mark now works as an astrologer with an international client base. You can find out more about this and schedule a reading with him on his website.

Shedding the Layers: How Ayahuasca Saved More Than My Skin