Items related to Catching Fire: How Cooking Made Us Human

Wrangham, Richard Catching Fire: How Cooking Made Us Human 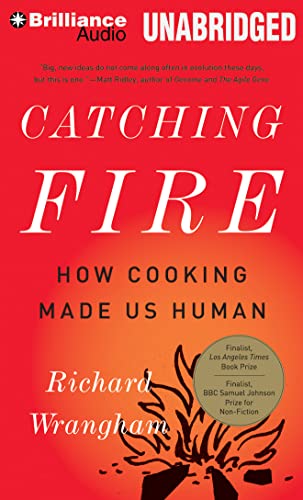 In "Catching Fire," one of the most ambitious arguments about human evolution since Darwin s "Descent of Man," renowned primatologist Richard Wrangham makes the claim that learning to cook food was the hinge on which human evolution turned. Eating cooked food, he argues, enabled us to evolve our large brains, and cooking itself became a primary focus of human social activity in short, cooking made us the social, intelligent, and sexual species we are today. Path-breaking and provocative, "Catching Fire" will fascinate anyone interested in our ancient origins or in our modern eating habits. ""Catching Fire" is convincing in argument and impressive in its explanatory power. A rich and important book. Michael Pollan, author of "In Defense of Food" and "The Omnivore s Dilemma" This is a daringly unorthodox book, and one that might just transform the way we understand ourselves. "Sunday Times" (UK) The ambition of Wrangham s theory gives it great appeal: Cooking is a powerful biological force and the universal activity around which the rest of human history the households and tribes, the migrations and wars, the religion and science arranged itself. But the added treat of the I-cook-therefore-I-am idea is the counterintuitive light it sheds on one of our most intense cultural preoccupations living the right life by eating naturally." "Slate" An exhilarating book. "The Times" (UK) A cogent and compelling argument. "Washington Post" Absolutely fascinating. "Nigella Lawson""

How exciting to see a distinguished scholar proving unequivocally that cookery is at the centre of our humanity (Sam Clark, Moro)

As easily digested as the cooked food it champions ... This book packs the punch of a Tournedo Rossini with the lightness of a foam infusion (Allegra McEvedy, Guardian chef-in-residence)

Catching Fire offers a startlingly original argument about how we came to be the social, intelligent, and sexual species we are today. Richard Wrangham argues that it was cooking that caused the extraordinary transformation of our ancestors from apelike beings to Homo erectus. At the heart of Catching Fire lies the groundbreaking new theory that the habit of eating cooked rather than raw food made us human. More than language, emotional intelligence, or the opposable thumb, the mastery of fire created us. Once our ancestors began cooking their food, the human digestive tract began to shrink and the brain to grow. Time once spent chewing tough raw food could be used instead to hunt and to tend camp. Cooking became the basis for pair bonding and marriage, created the household and even led to a sexual division of labour. (The Judges of the BBC Samuel Johnson Prize 2010 2010-05-26)

Catching Fire: How Cooking Made Us Human Audio CD