Items related to On Further Reflection: 60 Years of Writing

On Further Reflection: 60 Years of Writing 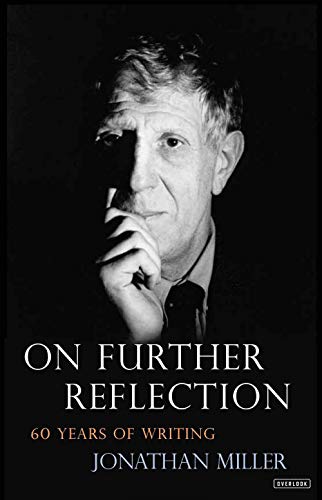 Actor, doctor, sculptor, TV personality, director of both film and opera--Sir Jonathan Miller's career covers a vast range of artistic endeavors and intellectual pursuits. Common amongst all of these trades, though, is Miller's exceptional talent for writing about them. Because his work has been published in locations as numerous and diverse as his interests, On Further Reflection is the necessary gathering-together of excerpts from Miller's best and most memorable pieces from the last six decades, and serves as a staggering indicator of the depth and variety of his preoccupations. The collection features his writing on mesmerism and neurology, art history and drama; it contains thoughts on how we interact with our own bodies, and how television changed in the wake of the Kennedy assassination. For each extract he provides a small introduction, placing the writing in the context of his work in the arts and sciences. Miller casts light on many oft-overlooked aspects of the world, and reminds us with his trademark wit and perception that to this day he is a unique presence on the cultural scene. A celebration of one of our finest minds, On Further Reflection brings together the best of Jonathan Miller for the first time in one collection.

Jonathan Miller first came to public attention as a performer in the very successful comedy review Beyond the Fringe. He became a doctor, but was soon seduced by television, presenting and directing arts programs, including a memorable Alice in Wonderland. He has directed plays for the BBC, the National Theatre, operas at the ENO, the Metropolitan in New York, and La Scala, Milan. He has also curated art exhibitions, as well as producing his own artworks in painting, sculpting, and photography. Underlying all his cultural work has been an interest in human behavior, how the brain works, and the philosophy of mind, and in media interviews and platform discussions he is still an important thinker in British cultural life.

On Further Reflection: 60 Years of Writing