Items related to Ayesha: Return of She

Ayesha: Return of She 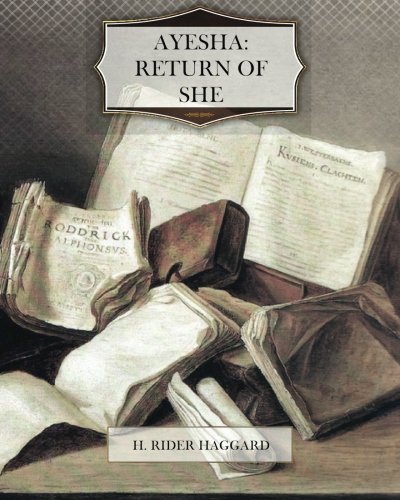 "I die not. I shall come again, and shall once more be beautiful. I swear it--it is true!"--SHE
Ayesha's strange last words before her apparent death in She (Dover 0-486-20643-2), Haggard's famous story of adventure, suspense, and the supernatural, come true. Guided by a vision, Leo Vincey, with his companion Holly, searches and finally finds his beloved. Ayesha: The Return of "She" concludes this incredible and thrilling drama of mystery, reincarnation, and immortal love.
The English novelist Sir Henry Rider Haggard (1856-1925) is one of the few popular writers who created their own mythological worlds. Ayesha, one of the great mythical creations of the late 19th century, continues to fascinate generations of readers. As Haggard writes, "Who and what was Ayesha, nay--what is Ayesha? An incarnate essence, a materialized spirit of Nature, the unforeseeing, the lovely, the cruel, and the immortal; ensouled alone, redeemable only by Humanity and its piteous sacrifice?" This book, which can be read by itself, continues to explore this mystery in a tale filled with exciting trials, ordeals, and exotic adventures in Asia.
Haggard creates unique and memorable characters--Leo Vincey and Ludwig Horace Holly, both determined to find the object of their quest or die; the Khania Atene of Kaloon, obsessed with love for Leo, and perhaps a reincarnation of the ancient Egyptian princess, Amenartas; the Khan, her mad and insanely jealous husband, with his death-hounds; Simbri, an evil shaman, wizard, and magician; the Hesea of the House of Fire, the high priestess of a cult of Isia worshippers transplanted to Asia; and more. This edition also includes 47 bold and imaginative illustrations by the noted English illustrator and painter, Maurice Greiffenhagen (1862-1931).
Haggard's novels have been called parables, asking "What are science, learning, and consciousness of knowledge and power, in the face of Omnipotence?" They have been called romance. And they have been called excitingly alive and imaginative by almost everyone from Robert Louis Stevenson to George Orwell.

Stephen Coan is an assistant editor of The Natal Witness.

Ayesha: Return of She