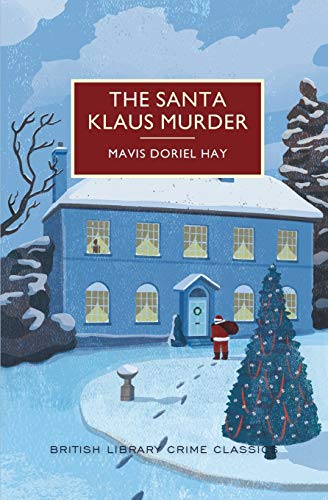 Mystery crime fiction written in the Golden Age of Murder

"Despite its title, this British Library Crime Classics reissue of a 1936 novel isn't just an entertaining Christmas read. It's a fine example of the old-time country-house murder mystery, with loads of suspects, lots of period atmosphere, and much caustic wit." -Booklist

Aunt Mildred declared that no good could come of the Melbury family Christmas gatherings at their country residence Flaxmere. So when Sir Osmond Melbury, the family patriarch, is discovered-by a guest dressed as Santa Klaus-with a bullet in his head on Christmas Day, the festivities are plunged into chaos. Nearly every member of the party stands to reap some sort of benefit from Sir Osmond's death, but Santa Klaus, the one person who seems to have every opportunity to fire the shot, has no apparent motive. Various members of the family have their private suspicions about the identity of the murderer, and the Chief Constable of Haulmshire, who begins his investigations by saying that he knows the family too well and that is his difficulty, wishes before long that he understood them better. In the midst of mistrust, suspicion and hatred, it emerges that there was not one Santa Klaus, but two.

Mavis Doriel Hay's The Santa Klaus Murder is a traditional country house murder mystery - so that means a limited number of suspects, but in the case of this novel there are multiple narrators as various characters give their versions of events....The chapters told from the viewpoints of various guests are a nice twist and author Mavis Doriel Hay manages to convey a different tone to each of these chapters as they pave the way to the crime. Philip Cheriton's chatty account gives a nice history of the family and various relationships, and this is in wonderful contrast to Aunt Mildred's fussy, critical narrative. We see that stubbornness runs in the Melbury blood, for Aunt Mildred, who helped steer most of the Melbury children towards "suitable" marriages, now sees the consequences of her work but refuses to admit that perhaps she was wrong....There's a clue thrown out very early in the book which signals the solution, and while The Santa Klaus Murder has nothing new to offer to the genre, it is an enjoyable, seasonal read....The book comes complete with a plan of the ground floor of Flaxmere House and a cast of characters....Review copy. This is another British Library Crime Classic from Poisoned Pen Press.

This 1930s novel is a proper Golden Age murder mystery, the kind where you need a floor plan, a timetable, and a couple of family trees to follow it all completely....It's a country house Christmas with a rich old gentleman and a bunch of heirs and prospective heirs whose relationships are more complex than they seem at first....The plot is complex, but the writer plays fair -- an alert reader might be able to guess the killer!

The Santa Klaus Murder is a mystery novel set in England in 1935. The first chapters, which cover the days leading up to the murder, are reports written by various members of the family. Each described what happened on a certain day and why certain people would or would not have a motive to kill. Once the murder occurred, the story was written primarily from the viewpoint of the detective. I enjoyed this format as it allowed us to get into the thoughts of several characters and better understand the family dynamics....There were clues, and many of them were in those reports about the days leading up to the murder. The detective didn't get these reports until later, so the reader had the advantage of knowing more information. Using this information, you can quickly identify the few, actual suspects. Then it was simply a matter of narrowing down who was involved. The detective steadily followed up the clues he found, but he had a harder time of it. Almost everyone was hiding things from him. The mystery kept me curious until the end even though I had most of it worked out before the detective....There was no sex. There was a minor amount of bad language and a few uses of name calling (referring to a person as a certain equine animal). Overall, I'd recommend this mystery to those who enjoy old-style puzzle-mysteries with interesting formats.

The Melbury family Christmas gatherings at country residence Flaxmere are dreaded by all except for the patriarch, Sir Osmond Melbury. Not willing to risk their inheritance, members dutifully obey the holiday summons, but this Christmas arrives with a terrible surprise when Santa Klaus finds Sir Osmond shot in his study. With so many at the house, who would benefit from Sir Osmond's death? It won't be easy for the chief constable to determine the culprit. VERDICT Hay's 1936 country-house mystery joins a series of classic titles rediscovered by the British Library. While Hay is not as well known as Agatha Christie or Dorothy L. Sayers, her golden age mystery holds up well and will appeal to mystery lovers of this era.

....Hay has made it very understandable and easy to read, weaving humor and British scenarios throughout. As the story goes on, readers will enjoy the suspense, and also the interesting and odd characters that make up the Melbury family. Hay did an excellent job creating her characters, and they seem very real, bringing new meaning to the much used phrase "you can't pick your relatives...".For readers who are looking for a light, fun suspense novel, The Santa Klaus Murder is a good choice. It is a great read for the Christmas season, not only because it takes place over the holiday, but also because even avid readers are busier at Christmas time and this novel goes fast.

Author Mavis Doriel Hay does a nice job weaving in the family skeletons and dissensions by having Colonel Halstock interview each of the family and the lead servants. She shows us the motive each of the family may have had without simply telling us, and she also lays several false trails and red herrings. (Personally I suspected the actual culprit from the beginning because of the way he was introduced.)I'm not crazy about murder mysteries but do enjoy the odd British country house weekend novel and this was a fine example, but with the twist of a dead body in the study with a gun!

This is a great book to read over the holidays. Just enough of everything, bringing this Christmas mystery into my top favorites this season.

The Santa Klaus Murder by Mavis Hay is a delightfully old fashioned murder mystery in the style of Agatha Christie. When Sir Oswald Melbury is murdered on Christmas day all the Christmas visitors are under suspicion and each of them has his or her own motive for wanting the man dead.

The Santa Klaus Murder by author Mavis Doriel Hay is a classic British cozy with a Christmas theme. Written in 1936 and long out of print, it is being released as part of the British Library's Crime Classics series. It is an intelligent, well-written mystery with plenty of suspects to keep the reader guessing but plenty of clues to point the way. At times, I found it a bit draggy and, at others, confusing, but over all a nice mystery just in time for the holidays.

Originally published in 1936, this delightful entry in the British Library Crime Classics series from Hay (1894-1979) contains all the elements of a golden age English whodunit. At Christmas-time, the members of the Melbury family gather at their ancestral home, Flaxmere, in the county of Haulmshire. Almost everyone at Flaxmere has some motive for murdering the family patriarch, Sir Osmond, who's discovered shot in the study on Christmas Day. Colonel Halstock, a neighbor and the local chief constable, leads the investigation, and he soon comes to the unsatisfying initial conclusion that the only person who had the opportunity to kill Sir Osmond was the young man in the Santa suit who had no motive for the deed. Hay (Murder Underground) sets Halstock a merry puzzle, with family members changing their stories at every turn for their own reasons. Halstock eventually susses out the killer's identity in such a way to cause the reader to exclaim, "Of course!?"

--Publishers Weekly About the Author:

MAVIS DORIEL HAY (1894-1979) was a novelist of the golden age of British crime fiction. Her three detective novels were published in the 1930s and have now been reintroduced to modern readers by the British Library.