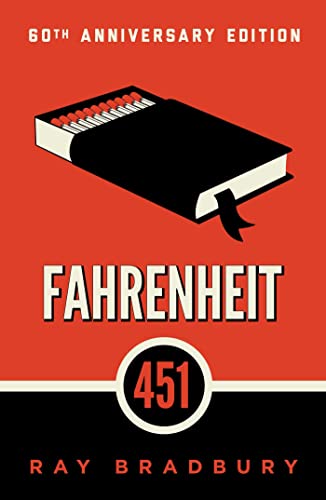 Sixty years after its originally publication, Ray Bradbury's internationally acclaimed novel Fahrenheit 451 stands as a classic of world literature set in a bleak, dystopian future. Today its message has grown more relevant than ever before. Guy Montag is a fireman. His job is to destroy the most illegal of commodities, the printed book, along with the houses in which they are hidden. Montag never questions the destruction and ruin his actions produce, returning each day to his bland life and wife, Mildred, who spends all day with her television "family." But when he meets an eccentric young neighbor, Clarisse, who introduces him to a past where people didn't live in fear and to a present where one sees the world through the ideas in books instead of the mindless chatter of television, Montag begins to question everything he has ever known.

In Fahrenheit 451, Ray Bradbury's classic, frightening vision of the future, firemen don't put out fires--they start them in order to burn books. Bradbury's vividly painted society holds up the appearance of happiness as the highest goal--a place where trivial information is good, and knowledge and ideas are bad. Fire Captain Beatty explains it this way, "Give the people contests they win by remembering the words to more popular songs.... Don't give them slippery stuff like philosophy or sociology to tie things up with. That way lies melancholy."

Guy Montag is a book-burning fireman undergoing a crisis of faith. His wife spends all day with her television "family", imploring Montag to work harder so that they can afford a fourth TV wall. Their dull, empty life sharply contrasts with that of his next-door neighbour Clarisse, a young girl thrilled by the ideas in books, and more interested in what she can see in the world around her than in the mindless chatter of the tube. When Clarisse disappears mysteriously, Montag is moved to make some changes, and starts hiding books in his home. Eventually, his wife turns him in, and he must answer the call to burn his secret cache of books. After fleeing to avoid arrest, Montag winds up joining an outlaw band of scholars who keep the contents of books in their heads, waiting for the time society will once again need the wisdom of literature.

Bradbury--the author of more than 500 short stories, novels, plays and poems--including The Martian Chroniclesand The Illustrated Man--is the winner of many awards, including the Grand Master Award from the Science Fiction Writers of America. Readers aged 13 to 93 will be swept up in the harrowing suspense of Fahrenheit 451, and no doubt will join the hordes of Bradbury fans worldwide. --Neil Roseman

"Brilliant . . . Startling and ingenious . . . Mr. Bradbury's account of this insane world, which bears many alarming resemblances to our own, is fascinating." --Orville Prescott, The New York Times

"A masterpiece . . . A glorious American classic everyone should read: It's life-changing if you read it as a teen, and still stunning when you reread it as an adult." --Alice Hoffman, The Boston Globe

"One of this country's most beloved writers . . . A great storyteller, sometimes even a mythmaker, a true American classic." --Michael Dirda, The Washington Post

"The sheer lift and power of a truly original imagination exhilarates . . . His is a very great and unusual talent." --Christopher Isherwood, Tomorrow