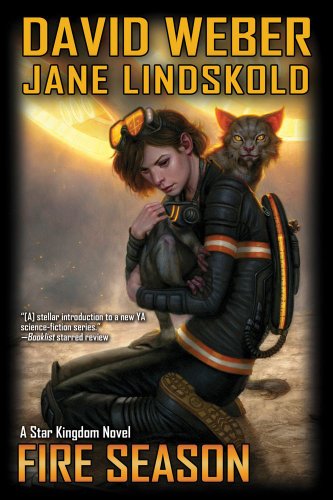 With over seven million copies of his books in print and seventeen titles on the New York Times bestseller list, David Weber is the science fiction publishing phenomenon of the new millennium. In the hugely popular Honor Harrington series, the spirit of C.S. Forester's Horatio Hornblower and Patrick O'Brian's Master and Commander lives on--into the galactic future. Books in the Honor Harrington and Honoverse series have appeared on fourteen best seller lists, including those of The Wall Street Journal, The New York Times, and USA Today. While Weber is best known for his spirited, modern-minded space operas, he is also the creator of the Oath of Swords fantasy series and the Dahak saga. Weber has also written highly popular collaborations, including his Starfire Series with Steve White, which produced the New York Times bestseller The Shiva Option among others. Weber's collaboration with alternate history master Eric Flint led to the bestselling 1634: The Baltic War, and his planetary adventure novels with military science fiction ace and multiple national best-seller John Ringo includes the blockbusters March to the Stars and We Few. Finally, Weber's teaming with Linda Evans produced the bestselling Multiverse series. David Weber makes his home in South Carolina with his wife and children. Jane Lindskold is the award-winning, bestselling author of over twenty novels, including the incredibly popular Firekeeper series (Through Wolf's Eyes though Wolf's Blood), as well as over sixty shorter works of science fiction and fantasy. Several of her novels have been chosen by VOYA for their Best SF, Fantasy and Horror list. Lindskold's work has been repeatedly praised for its sensitive depiction of worlds and cultures different from our own -- especially those that aren't in the least human. Her works have been praised as "intricate, beautifully written" (Voya), "attention-grabber" (School Library Journal), "engrossing" (Miami Herald), "Thrilling" (Publisher's Weekly), "ripping good fantasy" (Kliatt). Reviewer Charles deLint called Lindskold "one of those hidden treasures of Amerian letters." She has been a frequent contributor to the Honorverse, where her tales of Queen Elizabeth and Prince Michael have a loyal and enthusiastic following.