Items related to Invisible Britain: Portraits of Hope and Resilience 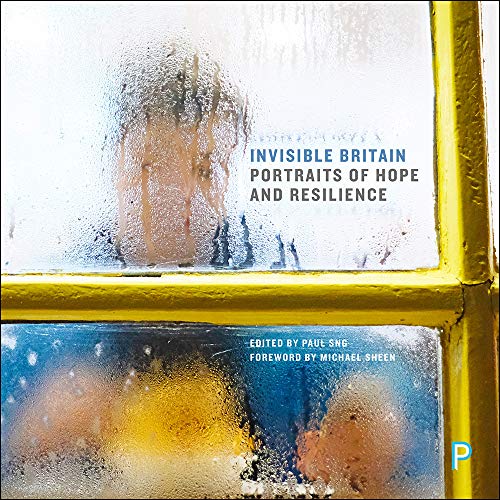 Invisible Britain: Portraits of Hope and Resilience reveals untold stories from people who have been left out of the media narrative and left behind by government policy. Featuring new work from award-winning and accomplished documentary photographers (including Andrew Jackson, Jenny Lewis, Jo Metson Scott, Laura Pannack, John Spinks and Jon Tonks), the book presents people speaking in their own words to create a narrative that illustrates how an unprecedented world of austerity, deindustrialisation and social upheaval is affecting us all. With a foreword by actor and activist Michael Sheen.

"This book illustrates a truth we cannot ignore. Class conflict is at the heart of our society, the inevitable consequence of this economic system. This should be the first principle of our politics. Paul Sng also shows another eternal truth: in the end, people always fight back. Our task is to ensure that their resistance is not in vain."
- Ken Loach

"This is a class that have everything taken from them and are then derided for the want of it: denied a functional education they are typified as ignorant, robbed of their jobs they are called benefit scroungers and, while effectively silenced in any cultural or social debate, are seen as inarticulate. This magnificent and very timely book puts the lie to that with its sensitive portraits – some inspiring, some heart-breaking, some both at once – of a diverse, various and above all resilient people who, when given a voice, have stories that urgently need to be listened to. This is a profoundly important human document, haunting for all the right reasons, and must be read."
- Alan Moore

"Here are the lives behind the stereotypes and the headlines. Here is the reality of lives lived large and small in marginalised communities all over the country. Lives that are invisible only to those in power but to those of us who've tasted disability, poverty, unemployment, illness and criminalisation all too familiar. This is a beautiful collection – not bleak – a portrait of humour, resilience and endurance. It's brilliant."
- Kit de Waal

"One of the most shameful legacies of this Government will be the way in which it gave rise to a nasty culture of stigmatising working class communities and looking down on those just struggling to survive, who could be any one of us in different circumstances. These stereotypes don't just demonise some of Britain's most deprived communities, they are actively used to justify and excuse the damaging policies that are making people's lives worse. This book powerfully gives voice to the experiences and perspectives of people who we are used to being marginalised and silenced."
- Jeremy Corbyn

"This collection captures both the struggle and survival of the people across the country who have been hit hardest by austerity. In an era when the media frequently fails to show the impacts of government policy this kind of book is particularly important."
- Caroline Lucas

"This is Britain in the decade of cuts – but these aren't portraits of despair. They're stories of defiance, of fight and of faith that a better country awaits us all. These are your friends, neighbours, family – and they've got stuff to tell you."
- Aditya Chakrabortty, The Guardian

"Photography enables a moment in the state of a nation to be captured and recorded with incisive focus. The portraits within this book offer a visual gateway to the stories of those unheard and invisible in Britain in this moment."
- Tracy Marshall, Director of Northern Narratives

"This is not just a collection of tender, beautiful photographs that give dignified people their rightful voice, but a record of austerity's stain on our country. The invisibility of the people in these stories is how the government has got away with the last eight years of destroying our communities, our social security system and our public services. We must amplify their voices at every opportunity. Because when they speak out, they speak for all of us."
- Ros Wynne-Jones, Daily Mirror

"The images in Invisible Britain, together with each personal testimony, document the reality faced by many today, and give honest representations of the people involved and their communities. Through the validation of the different lives shown; vulnerable people living on the sidelines, alienated and neglected by our current government, will perhaps feel empowered to challenge harmful policies that disregard their well-being. They are no longer invisible. We can see their truth, and we do care."
- Ella Murtha, The Tish Murtha Archive

"What the eye does not see is what they don't want you to see, or think over, or act on. Stunning."
- Danny Dorling, Oxford University

"Invisible Britain is an anthology of portraits and testimonials from the grassroots, from the everyday man and woman who have been forced to ride the rollercoaster of austerity. It captures the dignity and defiant spirit of resistance – the crescending voice of the invisible people who demand to be seen and heard."
- Ishmahil Blagrove, Writer and Filmmaker

"Let the ears of those responsible for austerity and its war on the poor ring with the words of these stories of defiant hope. Paul Sng's extraordinary book helps us see and hear the people who have lived through this devastating period in our history on their own terms."
- Professor Les Back, Goldsmiths College

"These are moving and powerful portraits of people up and down the country whose lives have been blighted by social class inequalities. These are human voices bravely fighting for a more equal society."
- Mike Savage, London School of Economics

"This project is an important reflection of the reality of austerity measures in the UK. As a US resident, UK born, it is beyond saddening for me to watch the security net not supporting the British, but tightening around people's necks; we have practically none in the US and I fear the direction in which the UK is heading cos it ain't pretty over here."
- Julie Grahame, aCurator

"Invisible Britain celebrates Britain in all its diversity, but also puts social justice to the forefront by directly confronting the cruelties of Austerity Rule and putting the forgotten people of Britain at its heart."
- Colin Pantall, Photographer

Paul Sng is a writer and filmmaker of dual British and Singaporean heritage whose work focuses on people who challenge the status quo. In 2015 he founded Velvet Joy Productions to explore the lives and work of individuals who have been neglected, marginalised or misrepresented by mainstream media.

Book Description Policy Press, United Kingdom, 2018. Paperback. Condition: New. Language: English. Brand new Book. Invisible Britain: Portraits of Hope and Resilience reveals untold stories from people who have been left out of the media narrative and left behind by government policy.Featuring the work of accomplished documentary photographers, the book presents people speaking in their own words to create a narrative showing how an unprecedented world of austerity, de-industrialisation and social upheaval is affecting us all. Seller Inventory # AAZ9781447344117

Book Description Policy Press, United Kingdom, 2018. Paperback. Condition: New. Language: English. Brand new Book. Invisible Britain: Portraits of Hope and Resilience reveals untold stories from people who have been left out of the media narrative and left behind by government policy.Featuring the work of accomplished documentary photographers, the book presents people speaking in their own words to create a narrative showing how an unprecedented world of austerity, de-industrialisation and social upheaval is affecting us all. Seller Inventory # BZE9781447344117

Book Description Policy Press, 2018. Paperback. Condition: New. Paperback. Invisible Britain: Portraits of Hope and Resilience is a photographic ethnography book that features the stories and portraits of individuals across the UK who have been impacted by social.Shipping may be from multiple locations in the US or from the UK, depending on stock availability. 120 pages. 0.500. Seller Inventory # 9781447344117