Items related to The Constant Soldier 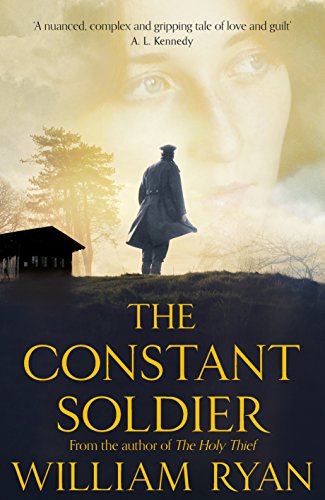 'Haunting, passionate, William Ryan’s The Constant Soldier is a subtle WW2 thriller of horror and love with an utterly gripping countdown to Gotterdamerung. One of my favourites of the year.' Simon Sebag Montefiore, author of Red Sky at Noon.

1944. Paul Brandt, a soldier in the German army, returns wounded and ashamed from the bloody chaos of the Eastern front to find his village home much changed and existing in the dark shadow of an SS rest hut – a luxurious retreat for those who manage the concentration camps, run with the help of a small group of female prisoners who – against all odds – have so far survived the war.

When, by chance, Brandt glimpses one of these prisoners, he realizes that he must find a way to access the hut. For inside is the woman to whom his fate has been tied since their arrest five years before, and now he must do all he can to protect her.

But as the Russian offensive moves ever closer, the days of this rest hut and its SS inhabitants are numbered. And while hope – for Brandt and the female prisoners – grows tantalizingly close, the danger too is now greater than ever.

And, in a forest to the east, a young female Soviet tank driver awaits her orders to advance . . .

The Constant Soldier is a nuanced, complex and gripping tale of guilt and love that captures the chaos at the end of WWII. --A.L. Kennedy, author of Costa Award Winning novel, Day

Elegaic, haunting, passionate William Ryan’s CONSTANT SOLDIER is a subtle WW2 thriller of horror and love with an utterly gripping countdown to Gotterdamerung.  One of my favourites of the year. --Simon Sebag Montefiore

The Constant Soldier is an extraordinary novel, with the intensity and pace of a thriller, and a wisdom and subtlety all of its own. I was gripped to the very last page. --Antonia Hodgson

Gripping . . . Ryan's elegant, powerful prose does justice to his difficult subject matter. The Constant Soldier has the pace of a thriller with characters and themes that are nuanced and subtle. --The Times

This is a terrific novel: a tough-minded, morally probing thriller that only gains in pace, depth and authority as it goes along. --Daily Telegraph

A modern classic from a master storyteller. --Lancashire Evening Post

The Constant Soldier is a beguiling blend, a spy novel-cum-historical thriller that offers a gripping but nuanced narrative set against the horrors of the absolute abuse of absolute power. It’s a bleak but rewarding novel about guilt, personal and shared, and taking responsibility for your actions, even if doing so offers no possibility of reward. --Irish Times

Ryan has produced a literary work, which, through complex yet realistic characters makes sense of the unthinkable. His portrait of the ending of the war, when the retreating camp officers realise they will be judged by their enemies, is skilfully evoked. And the ending — showing a glimpse of hope, is beautifully judged. --Irish Examiner

Powerful, engaging and peopled with believable characters, this atmospheric thriller grips from start to finish. --Choice

Superlative talent ... may be his most accomplished book yet. --Financial Times

It's already winning critical acclaim and has the hallmark of a prize-winning good read. --Simon Booker, Irish Independent

Anyone interested in morality tales and looking also for a damn good story should read the novel, surely one of the year’s best. Highly recommended. --Writing.ie

A book of great moral seriousness and a tense and grippingly atmospheric thriller, The Constant Soldier is a brilliant evocation of the price of redemption and the cost of guilt. An important book but one that reads with all the panache and skill of a thriller. Highly recommended --Stav Sherez, author of The Devil's Playground

Ryan has written a tour de force. A chilling account of civilian and military life amid the collapse of the Third Reich, Ryan's book makes for compelling, even mesmerising reading. From the icy winter wind to the bleak landscape, from the war weary SS officers and the terrified camp prisoners to the cynical, maimed hero, Ryan's world feels frighteningly authentic. I couldn't put it down. And as for the final scene...well, I defy you not to shed a tear. A bloody great read! --Ben Kane

Ryan has created a dark world of moral ambiguity that is both shocking and fascinating. The Constant Soldier is a richly vivid, gripping and sophisticated WW2 thriller. --Elizabeth Fremantle, author of Queen's Gambit

With its intriguing set up, subtly complex characters and Ryan's sharp eye for detail, The Constant Soldier had me enthralled from the very first page. A beautifully crafted story that will leave you breathless --Jason Hewitt, author of Devastation Road

William Ryan has always been good but this is a real step up. Set amid the worst horrors of World War Two, The Constant Soldier is as nuanced a study of hope versus evil as I've read. Stunningly impressive --Jon Courtenay Grimwood

The Constant Soldier is a thrilling and meticulously researched novel that viscerally evokes the social and moral chaos of the last days of Hitler's Germany. --Ben Fergusson, author of The Spring of Kasper Meier

William Ryan writes with a simple, elegant and utterly poetic style that just immerses you totally into the reading experience of it. Character study, setting, plot, everything working on every level, that is the bottom line. If that wasn't enough he's telling a fictional story here with its basis very firmly in fact and taking you back to a time of war, a world in turmoil, men and women living on the edge of reason and he makes it all so real and in the moment and so completely present that you could almost imagine it was happening around you right now. That is not technical writing skill that is creative genius right there . . . The story itself is emotive, thought provoking and completely engaging first page to last . . . The plot is taut and authentic, the descriptive prose practically flawless --Liz Loves Books

A gripping story of the struggle for humanity in the last days of the war. Ryan makes you think, makes you feel and makes you turn the page --Michael Ridpath, author of Where the Shadows Lie

The Constant Soldier is an elegant and powerful novel which sheds light upon a bleak and lesser known period of the war... William Ryan has conjured up both a gripping love story and thriller --Richard Foreman, author of Warsaw

From the first chapter, The Constant Soldier is a thoroughly engrossing, page-turning beauty of a novel. Ryan's glorious telling of this astonishing and haunting story is memorable --Kate Mayfield, author of The Undertaker’s Daughter

The Constant Soldier is a gripping tale of human love enduring in the face of terrible events, and a wartime thriller of controlled tension and approaching menace. Beautifully written and elegantly structured, it is a testament to the endurance and bravery of ordinary men and women battling with the vicious tides of history --Lloyd Shepherd, author of The English Monster

This is a lyrical, thoughtful book. Set towards the end of the Second World War, it focuses on a young German anti-Nazi, who finds himself obliged to fight for the regime. Outwardly mutilated and scarred to the point of being unrecognisable, he is sent home, where he strives not only to survive but, inwardly, to maintain his identity and to expiate in some small way the burden of guilt he feels for the things he has been obliged to witness. The restraint in the telling makes the story all the more powerful. I found this a truly compelling read --Aly Monroe, author of Icelight

This has the feel of a modern classic - it's up there with Birdsong and Alone in Berlin as the very best of its kind. Ryan has already proved with his excellent Korolev series, set in Soviet Russia, that he's a master storyteller. Moving the action to a Nazi Germany facing defeat at the end of WW2 is just as atmospheric. And in dissident German soldier Paul Brandt - horribly disfigured on the eastern front - Ryan has created a believable and engaging central character for this fabulous literary thriller --David Young, author of Stasi Child

A gripping, powerful tale of love and survival set against the final bitter weeks of the Nazi regime. Perfect for fans of C. J. Sansom's Winter in Madrid.

Book Description 2016. Paperback. Condition: New. Paperback. A powerful tale of love and survival set against the final bitter weeks of the Nazi regime.Gripping . The Constant Soldier has the pace of a thriller with characters and themes that are .Shipping may be from multiple locations in the US or from the UK, depending on stock availability. 400 pages. 0.534. Seller Inventory # 9781447255093

Book Description 2016. Paperback. Condition: New. Paperback. A powerful tale of love and survival set against the final bitter weeks of the Nazi regime.Gripping . The Constant Soldier has the pace of a thriller with characters and the.Shipping may be from our Sydney, NSW warehouse or from our UK or US warehouse, depending on stock availability. 400 pages. 0.534. Seller Inventory # 9781447255093