Items related to Burning the Days 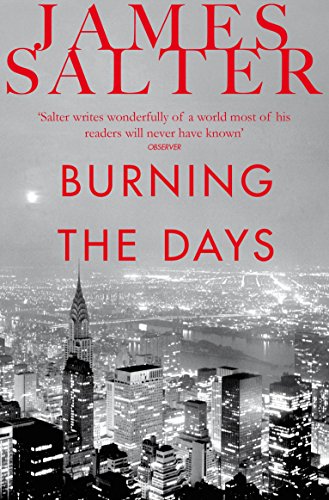 This is the brilliant memoir of a man who starts out in Manhattan and comes of age in the skies over Korea, before emerging as one of America's finest authors in the New York of the 1960s.
Burning the Days showcases James Salter's uniquely beautiful style with some of the most evocative pages about flying ever written, together with portraits of the actors, directors and authors who later influenced him. It is an unforgettable book about passion, ambition and what it means to live and to write.

As more and more reminiscences spill down the literary chute, it's clear that this trend is as strong as ever. The harvest has been a mixed one, of course. For every Frank McCourt or Mary Karr or Tobias Wolff, there seem to be a dozen score- settling memoirists, many of them less interested in understanding the past than sinking a hatchet into it. Now, however, another major contribution to the genre has appeared: James Salter's Burning the Days. This splendid autobiography had its inception in 1986, when the author wrote a trial-balloon recollection for Esquire, so he can hardly be accused of faddishness. But his book differs in another way from the current crop of memoirs, which often feature a forbidding gauntlet of familial or societal travails. Salter, contrarily, has led what many would consider a charmed life. Born an upper-middle-class "city child, pale, cared for, unaware", he attended West Point, served in the Korean War as a fighter pilot, and then seemingly ejected into a post-war period of undiluted glamour. To be sure, his early novels, such as The Hunters, failed to make Salter a household name. Still, he ran with literary lions like Irwin Shaw, drifted into the film business during the 1950s, and spent the next couple of decades jet-setting between New York, Paris, Rome and Aspen.

Salter puts the reader on notice from the very beginning that this will be a selective sort of recollection: "If you can think of life, for a moment, as a large house with a nursery, living and dining rooms, bedrooms, study, and so forth, all unfamiliar and bright, the chapters which follow are, in a way, like looking through the windows of this house.... At some windows you may wish to stay longer, but alas. As with any house, all within cannot be seen." What, then, are we privileged to see? Salter's airborne years account for perhaps a third of the book, and for this we should be grateful: no contemporary writer has made the experience more vivid or eerily palpable. There are brilliant evocations of New York, Rome and Paris, some of which rival the virtuosic scene-painting in the author's A Sport and a Pastime. More to the point, there are human beings, who tend to get semi-apotheosized by the sheer elegance of Salter's prose. ("I do not worship gods but I like to know they are there," he notes in his preface--although his portrait of, say, Irwin Shaw does seem to be propped up on a private altar.)

Salter's lofty romanticism can sometimes turn to gush. These blemishes are far outweighed, however, by the general splendour of the prose, which alternates Proustian extravagance with Hemingway-inspired economy. And even when the book flirts with frivolity, there is always the undertow of loss, of leave-taking. Many of the things that Salter describes are gone. In addition, he claims to have despoiled whatever remains by the very act of writing about it: "To write of someone thoroughly is to destroy them, use them up.... Things are captured and at the same time drained of life, never to shimmer or give back light again." No doubt his assertion has a grain of truth to it, at least for the author himself. But his loss is the reader's gain: most of what Salter has captured in Burning the Days remains alive and, frequently, luminous. --James Marcus

'A wise and sensual memoir. Salter writes his self-portrait by focusing on what has shaped him, by showing what he has loved and admired and feared to become in others. You cannot put it down' Michael Ondaatje

‘A masterwork of memory, deeply impressive and deeply moving’ Time Out

One of the great literary memoirs . . . there is nothing better in English about what it is like to fly' (Spectator)

A stylish and moving account of his various incarnations as a fighter pilot, rock climber, screenwriter and novelist . . . written in the heroic language of an American memoir (New Statesman)

An extraordinarily gifted composer of prose . . . [a] teller of memorable stories. . . . It isn't often that a writer of superlative skills knows enough about flying to write well about it; Saint-Exupérywas one; Salter is another (New York Times Book Review)

He can bestow a powerful aura of glamour and heightened significance to even the most casual encounter . . . entertaining, sharply observed . . . pure and ravishing (The Nation)

[His] account of air combat in Korea . . . stands as a masterpiece of battle writing in this century . . . His prose is in flight (Los Angeles Times Book Review)

A dazzling book . . . so full of splendid writing that at times the overwhelmed reader may blink like a sleeper awaking to hard light (Philadelphia Inquirer)

No man who is even remotely honest with himself can read Burning the Days without envy; no woman of similar truthfulness will fail to find Salter's life deeply romantic (John Irving Toronto Globe and Mail)

Book Description Pan MacMillan, United Kingdom, 2014. Paperback. Condition: New. Language: English. Brand new Book. This is the brilliant memoir of a man who starts out in Manhattan and comes of age in the skies over Korea, before emerging as one of America's finest authors in the New York of the 1960s. Burning the Days showcases James Salter's uniquely beautiful style with some of the most evocative pages about flying ever written, together with portraits of the actors, directors and authors who later influenced him. It is an unforgettable book about passion, ambition and what it means to live and to write. Seller Inventory # AA79781447250708