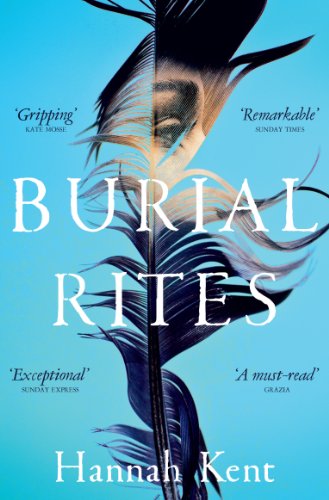 SHORTLISTED FOR THE BAILEYS WOMEN'S PRIZE FOR FICTION 2014.

A woman condemned to death for murdering her lover.

A family forced to take her in.

A priest tasked with absolving her.

But all is not as it seems, and time is running out:

winter is coming, and with it the execution date.

Only she can know the truth. This is Agnes's story.

'A story of swirling sagas, poetry, bitterness, claustrophobia ... through the long countdown towards Agnes's fate, it is Kent's heart-racing imagery that lingers ... even the bleakness of Agnes's end, its gut-churning fear, holds an exhilaration that borders on the sublime.' Sunday Telegraph

'This is a golden age both of historical fiction and of crime writing. A rare novel that combines both, this is one of the most gripping, intriguing and unique books I've read this year. Set in the harsh landscape of Iceland in the 19th century, it is a novel that bristles with beautiful description, that lays bare the harshness of women's lives of the period and considers the nature of justice.' Kate Mosse

'Gorgeous and haunting, Burial Rites will touch your heart.' Charlotte Rogan, author of The Lifeboat

'So gripping I wanted to rush through the pages, but so beautifully written I wanted to linger over every sentence. Hannah Kent's debut novel is outstanding.' Madeline Miller, Orange Prize-winning author of The Song of Achilles

'The debut that everyone's talking about' Guardian

'All this research has paid off in spades: the end result is a novel so steeped in period detail that the extracts lifted from original sources sit eloquently alongside the fictionalised account, the transition between the two being effortlessly smooth ... Burial Rites is a debut of rare sophistication and beauty - a simple but moving story, meticulously researched and hauntingly told.' Observer

'Kent is an Australian, but her beautiful first novel has the extraordinary setting of Iceland in the 1820s ... a wonderfully strange and haunting story.' The Times

'One of the best "Scandinavian" crime novels I have read ... this powerful book has the stark and tragic trajectory of the sagas ... Hannah Kent's prose is extraordinarily terse and precise as she tells the story from several different viewpoints ... and the cruelty of human beings is described with vivid intensity. Yet the beauty and fascination of this way of life is movingly portrayed, as is the spirit of its highly literate people. Kent's immersion in Icelandic lore seems total, though she came from the other side of the world. Great stories are universal.' Independent

'Hannah's rendering of Agnes Magnusdottir is as vivid and authentic as Mailer's Gary Gilmore, but done with greater economy and aplomb. She has resurrected her heroine with grace and skill; her writing style is innately lyrical and her descriptions are clear and beautifully constructed. Her dialogue is entirely believable, a thing not easily done. Some writers never get it right; Hannah has done it with seeming effortlessness in her first novel. Burial Rites is an amazing book. I was completely engrossed all the way through, and heartbroken at its end.' Donal Ryan, Man Booker longlisted author of The Spinning Heart

'Haunting ... startlingly vivid, a poetic reimagining of a world where "autumn fell upon the valley like a gasp" ... Kent skilfully ratchets up the sense of antagonism towards Agnes but also builds a recognisable picture of ordinary family life confronting extraordinary events ... This is a tormented tale of love and betrayal and divided loyalties recounted with heartfelt honesty ... An exceptional debut.' Eithne Farry, Sunday Express

'Remarkable ... extraordinary ... Burial Rites is thought-provoking and often deeply moving ... Beautifully written, this is a novel that will draw you in and touch your heart. Agnes will stay with you long after the last page has been turned.' Daily Express

'This dark thriller from Hannah Kent is a must-read ... Gripping.' Grazia

'An intriguing scenario' Mail on Sunday

'Spell-binding and moving, it's the kind of novel that gets under your skin, moves your blood, your heart.' Megan Abbott, author of The End of Everything and Dare Me

'Hannah Kent has crafted a genre all her own. Burial Rites is both a compelling thriller and a profound meditation on a mythic landscape.' Annabel Lyon, author of The Golden Mean

'A compelling read, heartbreaking and uplifting in equal measure.' Anne Berry, author of The Hungry Ghosts

'Based on the true story of the last woman to be executed in Iceland, Burial Rites is an incredibly moving novel and Hannah Kent evokes the harsh tundras of Iceland and the desolation of a powerless young woman living out her last days in a masterful way.' Stylist.co.uk, Top 10 Must Reads of August

'In 19th-century Ireland, convicted killer Agnes Magnusdottir is sentenced to death for stabbing her lover, but still has the power to change lives. Kent brilliantly recreates a community surviving in an inhospitable climate, and conveys the ineluctable force of one woman's personality on those around her.' Book of the Year, Financial Times

'A darkly gothic romance, a love song to the bleak beauty of Iceland, and a moving eulogy to a woman who had the odds stacked against her.' Irish Examiner

'An outstandingly good debut ... I found myself spellbound ... Kent has done a great deal of research and transformed its results into a work of art.' --Literary Review

Inspired by a true story, Burial Rites follows the final days of a young woman accused of murder in Iceland in 1829.

Book Description Paperback. Condition: new. Paperback. Inspired by a true story, Burial Rites follows the final days of a young woman accused of murder in Iceland in 1829. Shipping may be from multiple locations in the US or from the UK, depending on stock availability. Seller Inventory # 9781447233176