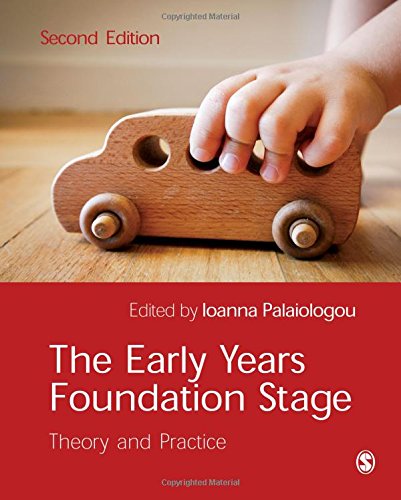 Lecturers, why waste time waiting for the post to arrive? Request your e-inspection copy today!

'When I showed my inspection copy to the Foundation Degree Programme Director, she said it was the whole programme in a nutshell' - Denise Reardon, Senior Lecturer, Canterbury Christ Church University

The Early Years Foundation Stage has been praised by academics and students for its theoretical underpinning and practical case studies. In the light of the revised EYFS, the new edition combines a comprehensive range of topics, up to date coverage of the EYFS curriculum, additional case studies, an increased focus on critical reflection, and access to free journal articles relating to key topics. It is an ideal resource for students undertaking any Early Years or Early Childhood Studies courses, or those working toward the Early Years Teacher qualification.

Visit www.sagepub.co.uk/Palaiologou2e for free access to a selection of SAGE Journal Articles related to key topics in the book.

'When I showed my inspection copy to the Foundation degree Programme Director, she said it was the whole programme in a nutshell'
- Denise Reardon, Senior Lecturer, Canterbury Christ Church University

Dr. Ioanna Palaiologou will be discussing key ideas from The Early Years Foundation Stage in the SAGE Early Years Masterclass, a free professional development experience hosted by Kathy Brodie. To sign up, or for more information, click here.

Dr. Ioanna Palaiologou CPsychol AFBPsS is an Associate at the Institute of Education, University College London, Centre for Leadership in Learning. Ioanna has worked as a university academic in the UK for the last 20 years and is now returning to her career as a child psychologist.  She is a Chartered Psychologist of the British Psychological Society with specialism on child development and learning theories and was appointed as Associate Fellow of BPS this year.  Currently she is the Co-Director of Canterbury Educational Services and Head of Children’s Services in the same company.

She joined BESA in 2005. She is a member of the Executive and has been the Chair in 2011-2012. Currently she is the Treasurer of the association.

Her recent books include:

Some of her recent selected papers include:

You can find Ioanna:

Ioanna Palaiologou will be discussing ideas from Child Observation in Doing Your Early Years Research Project, a SAGE Masterclass for early years students and practitioners in collaboration with Kathy Brodie. Find out more here.