Items related to The Affair 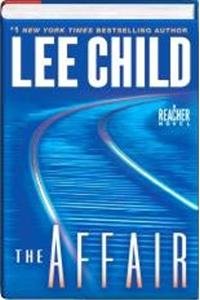 March 1997. A woman has her throat cut behind a bar in Carter Crossing, Mississippi. Just down the road is a big army base.Is the murderer a local guy - or is he a soldier?

Jack Reacher, still a major in the military police, is sent in undercover.The county sheriff is a former U.S. Marine - and a stunningly beautiful woman. Her investigation is going nowhere. Is the Pentagon stonewalling her? Or doesn't she really want to find the killer?

Plenty of action....much more of a whodunit than anything Lee Child has previously written...The gripping plot and breathtaking violence ensure it is difficult to put down. (Evening Standard)

Jack Reacher has long since earned his prominent place in the pantheon of cool,smart-talking American heroes....Shakes up the status quo by delivering the Reacher creation myth...stealthily funny...this book is really about the man himself. (Janet Maslin New York Times)

Just when you thought it couldn't possibly get any better, Lee Child pulls Jack Reacher out of another hole and, bang, he produces nothing short of a thriller masterpiece...Here, we get what we've been waiting for...the story of how Reacher became Reacher. (Henry Sutton Mirror)

Child on top of his game. It could well be his best book yet...The paradox of Reacher is that he is both a great big grizzly bear of a fighter...and a thinker, both Schwarzenegger and Socrates. Make love and war is his credo. (Independent)

With its revelations and its bonk-fest, it's an unabashed fan-pleaser, but also a timely, reassuring wallow in the undiluted essence of Reacher. (Telegraph)

From the number one bestseller: the coolest, sexiest, punch-packing Reacher thriller yet.

Book Description AudioGo, 2011. Condition: Good. Large type / large print edition. Former Library book. Shows some signs of wear, and may have some markings on the inside. Seller Inventory # 17770950-6

Book Description Windsor, 2011. Condition: Poor. This is an ex-library book and may have the usual library/used-book markings inside.This book has hardback covers. In poor condition, suitable as a reading copy. No dust jacket. Please note the Image in this listing is a stock photo and may not match the covers of the actual item,850grams, ISBN:9781445859682. Seller Inventory # 6643550

Book Description Paperback. Condition: Fair. A readable copy of the book which may include some defects such as highlighting and notes. Cover and pages may be creased and show discolouration. Seller Inventory # GOR010330525