Barclay, Kenny British Rail in the 1980s and 1990s: Diesel Locomotives and DMUs

British Rail in the 1980s and 1990s: Diesel Locomotives and DMUs 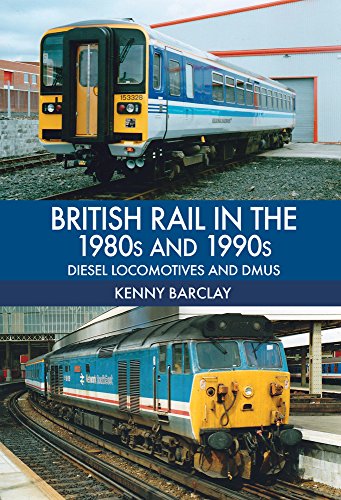 The 1980s and 1990s were exciting times for British Rail. For many years British Rail had been structured into regions and the livery for rolling stock consisted of blue and grey or just plain blue. Now, however, the railways of Britain were entering a new chapter of sectorisation, restructuring and divisions. We were introduced to exciting new bold liveries like Network South East s red, white, grey and blue, and Intercity s two-tone grey, red and white ¬ complete with stylish Silver Swallow logo. The freight companies also introduced new liveries; mostly a two-tone grey with logo to denote which sub-sector owned it and RES (Rail Express Systems) later introduced a striking red livery with blue and grey flashes.

New rolling stock locomotives, coaches, DMU and EMU all entered service across the country finished in the new liveries of the recently formed sectors. Other rolling stock moved on across the network and over time received new liveries for their new work. In this book, the first of two, Kenny Barclay shares some of his collection of photographs of diesel locomotives and Diesel Multiple Units taken at various locations across the country during the 1980s and 1990s. Being an employee of British Rail during this time, Kenny was able to travel across the network documenting the changes and this book collects some of his finest photographs.

Kenny Barclay is a lifelong transport enthusiast who begun to amass a significant collection of transport photographs during the 1980s and 1990s. Kenny now lives with his partner in the Highlands of Scotland and still employed within the railway industry as an operations manager. Outside of work Kenny has a collection of four vintage buses which have been restored as they would have looked in the 1980s.