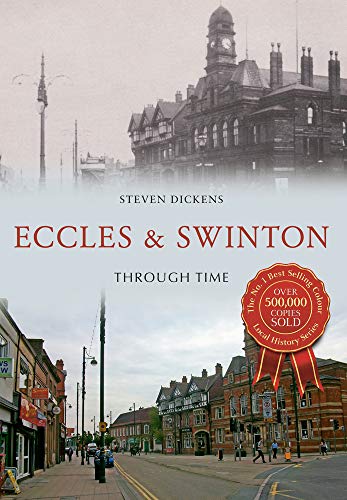 Eccles is a town in the City of Salford, whose development is closely related to the establishment of the parish church of St Mary, c. 1100, and from which it takes its name. The town’s economy shifted away from agriculture with the industrial revolution and the construction of textile mills, of which some survive. Famous for the Liverpool and Manchester Railway of 1830, the world’s first passenger service, the line is also noted for the first recorded accident, with the death of politician William Huskisson at Eccles. Today the town is a mix of surviving Victorian architecture and modern tower blocks.

Swinton is also in the City of Salford and the seat of Salford City Council. Originally a hamlet specialising in pig farming, from which its name is taken, Swinton is now a commuter town, close to Manchester city centre. Like Eccles, farming gave way to mills, industry and coal mining, with important road and railway links seeing the development of Swinton Park, as documented in Eccles & Swinton Through Time.

Steven John Dickens has a BA. Hons in History (Sheffield University) and an MA in Twentieth Century History (Liverpool University) and is a retired charge nurse and college lecturer. He has always had an interest in local history and social history and has also lectured on the history of the NHS. He has previously written for several local history publications, genealogy journals and magazines; including The Manchester Genealogist and The Journal of the Altrincham History Society.

1. Eccles and Swinton Through Time

Book Description Amberley Publishing. Paperback / softback. Condition: New. New copy - Usually dispatched within 4 working days. This fascinating selection of photographs traces some of the many ways in which Eccles & Swinton have changed and developed over the last century. Seller Inventory # B9781445620947

4. Eccles and Swinton Through Time