Items related to Walworth Through Time: A Second Selection

Walworth Through Time: A Second Selection 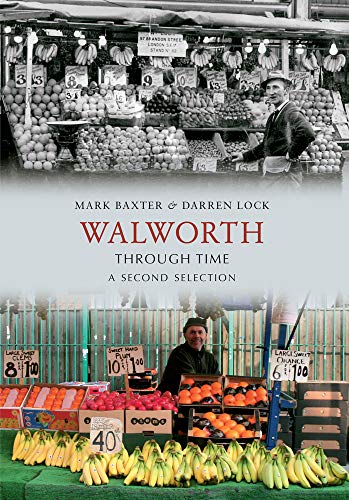 This unusual collection of photographs from the area of Walworth and its immediate surrounding area tell further stories on this fascinating part of South London. We take a peek at long lost cinemas, famous theatres, legendary local characters, war time bombing, a large urban park, the biggest nightclub in the world, a modern mosque, fondly remembered pubs and schools, local transport, often frequented shops and the ever rapidly arriving 'new builds'.We travel outside SE17 to take a look at parts of the Old Kent Road, Kennington, the Elephant and Castle and Camberwell - but the heart of the book is still in Walworth. We will introduce you to a mixed bag of world famous names such as Bobby Kennedy, Muhammad Ali, Dexys Midnight Runners, R.Whites lemonade, Buddy Holly and David Beckham. So, plump up a cushion and take a journey to Walworth and beyond!

Darren Lock is a well known local author who lives in Walworth.

1. Walworth Through Time A Second Selection

3. Walworth Through Time A Second Selection

4. Walworth Through Time A Second Selection

Book Description Amberley Publishing. Paperback / softback. Condition: New. New copy - Usually dispatched within 4 working days. This fascinating second selection of photographs traces some of the many ways in which Walworth has changed and developed over the last century. Seller Inventory # B9781445607092