Items related to Spooks the Unofficial History of MI5 From Agent Zig... 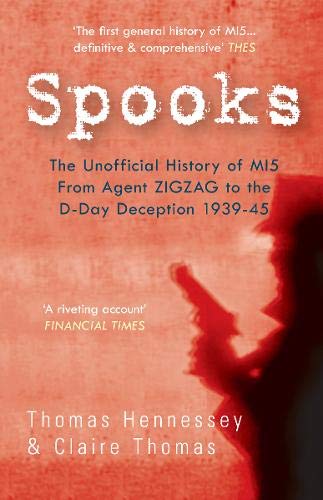 The real history of MI5. 'PO Box 500, London W2'; the nondescript address from behind which one of the world's most famous Secret Services hid: MI5. This book, based on previously secret sources, lifts the lid on Britain's Security Service in its battle against German espionage. During the Second World War, the Security Service, through brilliant officers such as Guy Liddell, Dick White and the fearsome spy-breaker, 'Tin-eye' Stephens, commandant of MI5's interrogation centre, Camp 020, successfully ran the Double Cross (XX) system. XX agents such as the dynamic, womanising petty criminal ZIGZAG, the suave TRICYCLE and the aptly named CARELESS laid the basis for Operation FORTITUDE in which MI5's agents BRUTUS and GARBO were central to the success of the greatest deception in modern military history: convincing Hitler that the D-Day landings in Normandy were an elaborate diversion to the 'real' Allied landings at Calais. It was MI5's finest hour.

Thomas Hennessey is Reader in History at Canterbury Christ Church University. He was an advisor to the award-winning BBC TV documentary ENDGAME IN IRELAND. He is a Fellow of the Royal Historical Society. His other books include A HISTORY OF NORTHERN IRELAND, DIVIDING IRELAND: WORLD WAR ONE & PARTITION, THE EVOLUTION OF THE TROUBLES 1970-72, THE NORTHERN IRELAND PEACE PROCESS: ENDING THE TROUBLES? and THE ORIGINS OF THE TROUBLES ('A valuable study' IRISH INDEPENDENT). He lives in London & Canterbury. Claire Thomas is a historian who specialises in the early years of the Cold War. She is currently working on a history of Britain's involvement in the Korean War. She lives in Folkestone.

1. Spooks the Unofficial History of MI5 From Agent Zig Zag to the D-Day Deception 1939-45 [Paperback] Hennessey, Thomas and Thomas, Claire