Items related to The Tudors Lady Jane Grey to Elizabeth I: The Complete...

Meyer, G. J. The Tudors Lady Jane Grey to Elizabeth I: The Complete Story of England's Most Notorious Dynasty

The Tudors Lady Jane Grey to Elizabeth I: The Complete Story of England's Most Notorious Dynasty 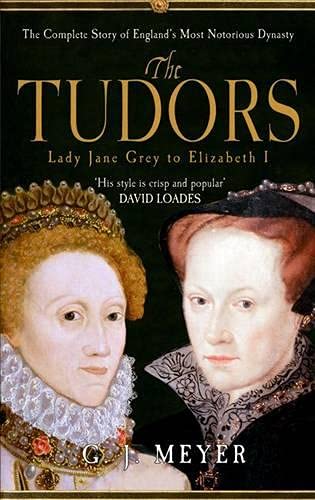 For the first time in decades, a fresh look at the fabled Tudor dynasty, comprising some of the most enigmatic figures ever to rule England. Acclaimed historian G. J. Meyer reveals the flesh-and-bone reality in all its wild excess. The boy king Edward VI, a fervent believer in reforming the English church, died before bringing to fruition his dream of a second English Reformation. Mary I, the disgraced daughter of Catherine of Aragon, tried and failed to reestablish the Catholic Church and produce an heir. And finally came Elizabeth I, who devoted her life to creating an image of herself as Gloriana the Virgin Queen but, behind that mask, sacrificed all chance of personal happiness in order to survive. THE TUDORS weaves together all the sinners and saints, the tragedies and triumphs, the high dreams and dark crimes, that reveal the Tudor era to be, in its enthralling, notorious truth, as momentous and as fascinating as the fictions audiences have come to love.

A sweeping history of the gloriously infamous Tudor era. Unlike the somewhat ponderous biographies of the Henrys, Elizabeths and Boleyns that seem to pop up perennially, Meyer displays some flashy, fresh irreverence - Energetic and comprehensive. --Kirkus Review

History buffs will savour Meyer's cheeky, nuanced, and authoritative perspective on an entire dynasty, and his study brims with enriching background. --Publishers Weekly

G. J. Meyer is a former Woodrow Wilson and Harvard University Fellow with an M.A. in English literature. His other books include A WORLD UNDONE: THE STORY OF THE GREAT WAR ('Magnificent - researched to the last possible dot' THE WASHINGTON TIMES, 'Masterful - has an instructive value than can scarcely be measured' LOS ANGELES TIMES, 'A worthy counterpoint to Hew Strachan's magisterial three-volume scholarly project' PUBLISHERS WEEKLY). He lives in Goring-on-Thames.

1. The Tudors: Lady Jane Grey to Elizabeth I