Items related to The Murder Of Roger Ackroyd

The Murder Of Roger Ackroyd 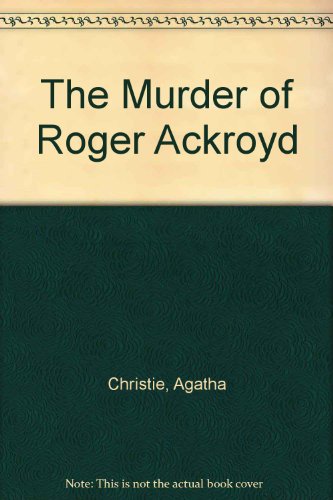 There are rumours she murdered her first husband, rumours that she was blackmailed, and rumours that her secret lover was Roger Ackroyd. When Ackroyd is found murdered it is unlucky for the killer that Hercule Poirot is close by.

Setting up the traditional rules of mystery only to shatter them, this ingeniously tricky masterpiece startled fans, polarised critics, and stunned the Detection Club, the highly esteemed literary organisation, of which Christie herself was a member. One of the most famous detective novels ever written, and certainly one of the most controversial, The Murder of Roger Ackroyd was championed by Dorothy L Sayers who said, “Christie fooled you (all)... It’s the readers business to suspect everyone.”

“A classic – the book has worthily earned its fame.”
Irish Independent

In the quiet village of King’s Abbot a widow’s suicide has stirred suspicion – and dreadful gossip.

1. The Murder Of Roger Ackroyd

Book Description Ulverscroft, 2010. Paperback. Condition: Good. Ex Library Book with usual stamps and stickers. Good reading copy. Good condition is defined as: a copy that has been read but remains in clean condition. All of the pages are intact and the cover is intact and the spine may show signs of wear. The book may have minor markings which are not specifically mentioned. Most items will be dispatched the same or the next working day. Seller Inventory # mon0011750153