Items related to Payment in Blood 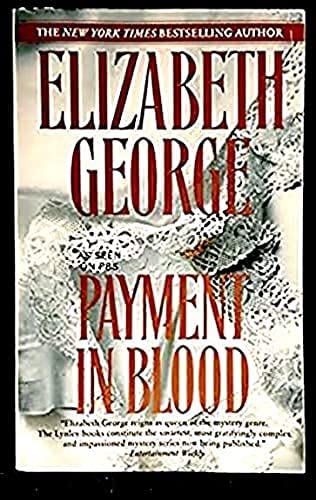 The career of playwright Joy Sinclair comes to an abrupt end on an isolated estate in the Scottish Highlands when someone drives an eighteen-inch dirk through her neck. Called upon to investigate the case in a country where they have virtually no authority, aristocratic Detective Inspector Thomas Lynley and his partner, Detective Sergeant Barbara Havers, grapple for both a motive and a murderer. Emotions run deep in this highly charged drama, for the list of suspects soon includes Britain's foremost actress, its most successful theatrical producer, and the woman Lynley loves. He and Havers must tread carefully through the complicated terrain of human relationships while they work to solve a case rooted in the darkest corners of the past and the unexplored regions of the human heart.

"A vivid cast of suspects, an appealing team of sleuths...a country-house setting that will put readers in mind of the best of Agatha Christie. For fans of this type of puzzle, Payment in Blood is a must."--Plain Dealer, Cleveland "A spectacular new voice in mystery writing...[George] invites comparison with both P.D. James and Ruth Rendell in the psychological interest of her characters and the intricacy and ingenuity of her plotting."--Los Angeles Times "Complex, rich, and accomplished enough to elbow the author between P.D. James and Ruth Rendell."--Kirkus Reviews From the Paperback edition. Book Description:

The second novel in the best-selling Inspector Lynley mystery series

Book Description Hodder Paperbacks, 2012. Paperback. Condition: Used; Good. Dispatched, from the UK, within 48 hours of ordering. This book is in good condition but will show signs of previous ownership. Please expect some creasing to the spine and/or minor damage to the cover. Damaged cover. The cover of is slightly damaged for instance a torn or bent corner. Grubby book may have mild dirt or some staining, mostly on the edges of pages. Seller Inventory # CHL5544772

Book Description Hodder Paperbacks, 2012. Paperback. Condition: Used; Very Good. Dispatched, from the UK, within 48 hours of ordering. Though second-hand, the book is still in very good shape. Minimal signs of usage may include very minor creasing on the cover or on the spine. Seller Inventory # CHL1429782

Book Description Paperback. Condition: Very Good. The book has been read, but is in excellent condition. Pages are intact and not marred by notes or highlighting. The spine remains undamaged. Seller Inventory # GOR004023907

Book Description Hodder & Stoughton Ltd, 2012. Paperback. Condition: Good. All orders are dispatched the following working day from our UK warehouse. Established in 2004, we have over 500,000 books in stock. No quibble refund if not completely satisfied. Seller Inventory # mon0004042013

Book Description Hodder & Stoughton Ltd, 2012. Paperback. Condition: Very Good. All orders are dispatched the following working day from our UK warehouse. Established in 2004, we have over 500,000 books in stock. No quibble refund if not completely satisfied. Seller Inventory # mon0004187946

Book Description Hodder Paperbacks 12/04/2012, 2012. Condition: Good. Will be shipped promptly from UK warehouse. Book is in good condition with no missing pages, no damage or soiling and tight spine. There may be some dog-eared pages showing previous use but overall a great book. Seller Inventory # 9053-9781444761023

Book Description Hodder Paperbacks 12/04/2012, 2012. Condition: Very Good. Shipped within 24 hours from our UK warehouse. Clean, undamaged book with no damage to pages and minimal wear to the cover. Spine still tight, in very good condition. Remember if you are not happy, you are covered by our 100% money back guarantee. Seller Inventory # 6545-9781444761023

Book Description Hodder Paperbacks, 2012. Paperback. Condition: Very Good. Payment in Blood This book is in very good condition and will be shipped within 24 hours of ordering. The cover may have some limited signs of wear but the pages are clean, intact and the spine remains undamaged. This book has clearly been well maintained and looked after thus far. Money back guarantee if you are not satisfied. See all our books here, order more than 1 book and get discounted shipping. . Seller Inventory # 7719-9781444761023

Book Description Hodder and Stoughton Ltd, 2012. Hardcover. Condition: Used; Good. **Simply Brit** Shipped with Premium postal service within 24 hours from the UK with impressive delivery time. We have dispatched from our book depository; items of good condition to over ten million satisfied customers worldwide. We are committed to providing you with reliable and efficient service at all times. Seller Inventory # mon0001755938