Items related to The Killing Kind 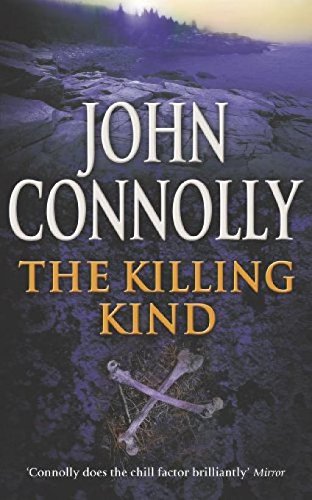 His two previous novels, Every Dead Thing and Dark Hollow were international bestsellers. Now the compulsively readable (Publishers Weekly) Connolly confirms his position as a leading crime novelist with a story of superb menace and superb style.

Spider-bites are a nasty way to die, and there is a man out there with an unusual taste for insect venom of all kinds and for the deaths of those who disagree with or affront him. John Connolly's sleuth Charlie Parker is free of the ghosts of his slaughtered wife and child, but sooner or later new ghosts come to him demanding silently that he avenge them. In The Killing Kind, it is not Grace, the ex-girlfriend whose faked suicide he is hired to investigate, so much as the dead fanatics she was killed for writing a thesis on. The Aroostook Baptists disappeared into the gloomy woods of North Maine in the sixties and nothing more is known until road workers find a mass burial. Connolly provides his usual excellent combination of snappy one-liners (many of them from Parker's gay assassin sidekicks Angel and Louis) together with scenes of the utmost terror. Parker soon realises that the spider killer, Elmer Pudd, is only the tool of someone far worse, a sanctimonious artist in intolerance and mayhem--and it is only by carefully measured doses that we come to realise just how bad that is going to be. --Roz Kaveney

The unrivalled master of Maine noir. Menace has never been so seductive. (Guardian)

Connolly does the chill factor brilliantly, creating horror out of the sort of misguided religious fervour not seen since Waco. Mass graves, Parker's sixth sense and deadly spiders set the mind and pulse racing. (Daily Mirror)

Book Description Hodder and Stoughton Ltd, 2010. Paperback. Condition: Used; Good. Dispatched, from the UK, within 48 hours of ordering. This book is in good condition but will show signs of previous ownership. Please expect some creasing to the spine and/or minor damage to the cover. Damaged cover. The cover of is slightly damaged for instance a torn or bent corner. Aged book. Tanned pages and age spots, however, this will not interfere with reading. Seller Inventory # CHL4355464

Book Description Paperback. Condition: Very Good. The book has been read, but is in excellent condition. Pages are intact and not marred by notes or highlighting. The spine remains undamaged. Seller Inventory # GOR004087085

Book Description Hodder and Stoughton Ltd, 2010. Hardcover. Condition: Used; Good. **Simply Brit** Shipped with Premium postal service within 24 hours from the UK with impressive delivery time. We have dispatched from our book depository; items of good condition to over ten million satisfied customers worldwide. We are committed to providing you with reliable and efficient service at all times. Seller Inventory # mon0001755504

Book Description Hodder. Condition: Good. A+ Customer service! Satisfaction Guaranteed! Book is in Used-Good condition. Pages and cover are clean and intact. Used items may not include supplementary materials such as CDs or access codes. May show signs of minor shelf wear and contain limited notes and highlighting. Seller Inventory # 1444760971-2-4

Book Description Hodder & Stoughton Ltd, 2010. Hardcover. Condition: Good. All orders are dispatched the following working day from our UK warehouse. Established in 2004, we have over 500,000 books in stock. No quibble refund if not completely satisfied. Seller Inventory # mon0004258037

Book Description Hodder & Stoughton Ltd 08/02/2010, 2010. Condition: Very Good. This book is in very good condition and will be shipped within 24 hours of ordering. The cover may have some limited signs of wear but the pages are clean, intact and the spine remains undamaged. This book has clearly been well maintained and looked after thus far. Money back guarantee if you are not satisfied. See all our books here, order more than 1 book and get discounted shipping. . Seller Inventory # 7719-9781444760972

Book Description Hodder & Stoughton Ltd 08/02/2010, 2010. Condition: Very Good. Shipped within 24 hours from our UK warehouse. Clean, undamaged book with no damage to pages and minimal wear to the cover. Spine still tight, in very good condition. Remember if you are not happy, you are covered by our 100% money back guarantee. Seller Inventory # 6545-9781444760972

Book Description Hodder & Stoughton Ltd 08/02/2010, 2010. Condition: Good. Will be shipped promptly from UK warehouse. Book is in good condition with no missing pages, no damage or soiling and tight spine. There may be some dog-eared pages showing previous use but overall a great book. Seller Inventory # 9053-9781444760972