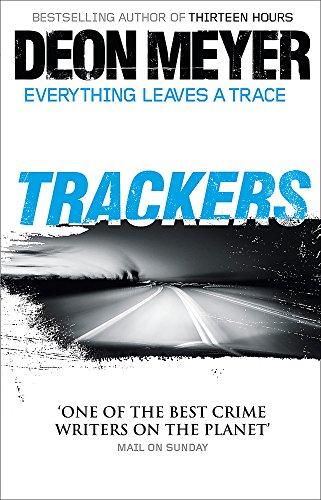 A housewife running from years of domestic abuse. A bodyguard hired to escort a smuggled rhinoceros. A group of Islamic terrorists based in a quiet residential street. A secret government agency threatened with amalgamation within a bigger department. A retired policeman trying to get used to his new career in the private sector.

Each of these strands of a brilliant narrative is populated with superbly-drawn characters, and woven into a stunningly exciting drama by the undisputed king of South African suspense fiction. Not only a heart-pounding thriller, but also a love story and a fabulous kaleidoscopic picture of South African society, this is the finest novel yet from an author whose reputation is growing all around the world.

Smuggling, missing persons and an edgy post-apartheid South Africa interlace in a riveting crime novel . . . This is the author's most accomplished novel to date. Following the thrilling plot of his best­selling Thirteen Hours was always going to be a challenge but he's visibly gained confidence, showing his technical skill and handling the different sections of the new book with effortless ease. It's a mesmerising read, and a ­startling revelation at the very end suggests that we haven't heard the last of these engaging characters. (The Sunday Times)

How fulfilling the rewards are for those seeking crime fiction with real texture and intelligence . . . The author presents an unsparing picture of social divisions in post-apartheid South Africa . . . But perhaps his key achievement is the astutely drawn trio: the conflicted bodyguard, streetwise but falling for a major deception; the young woman fleeing a desperately unhappy marriage and discovering something that changes her perception of herself; and the ex-cop, finding that the incendiary reserves of violence in his personality are nearer to the surface than he thought. TRACKERS is a sprawling, invigorating and socially committed crime novel. (Independent)

An ambitious, multi-threaded tale . . . comprehensively pulling the reader into the melee of modern South Africa . . . this is a book that tells a cracking story and captures the criminal kaleidoscope of a nation. (Times Literary Supplement)

Meyer is the leading chronicler of South Africa, and his latest novel shows off his technical skill . . . a dazzling performance. (Sunday Times Books of the Year 2011)

The Thriller Shot of the Year title goes to South African Deon Meyer for his superb tour-de-force TRACKERS which combines a spy plot worthy of Le Carre ("spy the beloved country") with several tense and violent criminal sub-plots and a complex and stunningly impressive narrative structure. All in all, a masterpiece of South African crime writing; which is rapidly proving to be the bench-mark of international crime fiction.' (Shots)

The book that stayed with me most from this year is Deon Meyer's TRACKERS . . . a dazzling performance. (Joan Smith, Sunday Times books of the year 2011)

Critics were struggling to come up with new adjectives to praise the South African writer Deon Meyer's TRACKERS, a menacing tale of smuggling and disappearances on a sprawling canvas of post-apartheid South Africa. (Independent Books of the Year)

A pulse-pounding thriller which also gives the reader 'total immersion' in a foreign culture - just as the Scandinavians do.

Book Description Paperback. Condition: Good. The book has been read but remains in clean condition. All pages are intact and the cover is intact. Some minor wear to the spine. Seller Inventory # GOR004430300

Book Description Hodder and Stoughton, 2011. Hardcover. Condition: Used; Good. Ex Library Copy **SHIPPED FROM UK** We believe you will be completely satisfied with our quick and reliable service. All orders are dispatched as swiftly as possible! Buy with confidence! Aloysius Ihezie. Seller Inventory # 3788167

Book Description Hodder & Stoughton, 2011. Condition: Good. First Edition. Ships from the UK. Former Library book. Shows some signs of wear, and may have some markings on the inside. Seller Inventory # GRP67824080