Items related to The Poison Tree 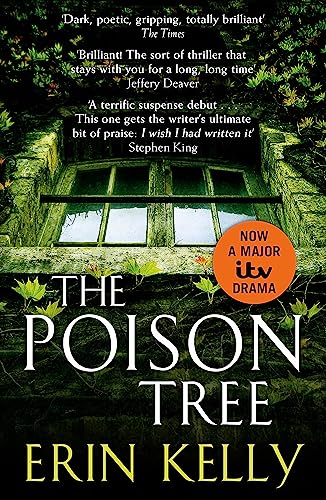 I have given up so much and done so many terrible things already for the sake of my family that I can only keep going.

I do not know what is going to happen to us.

I am frightened, but I feel strong.

I have the strength of a woman who has everything to lose.

She was quickly drawn into Biba's world, and for a while life was one long summer of love.

But every summer must end. By the end of theirs, two people were dead - and now Karen's past has come back to haunt her . . .

'A terrific suspense debut, reminiscent of another British woman's auspicious bow: Daphne Du Maurier's Rebecca. The shadows gather until the ending looms like a threatening figure. This one gets the writer's ultimate bit of praise: I wish I had written it.' (Stephen King )

(Daily Mail Books of the Year )

'Brilliant! THE POISON TREE grabs you with the first sentence and doesn't let goeven after the last page; this is the sort of thriller that stays with you for a long, long time. Compelling and lyrically stylish, THE POISON TREE is a true winner!' (Jeffery Deaver )

'An unusually good debut psychological thriller from an author . . . whose plotting, characterisation, fluent writing and dark humour should ensure her a successful career' (Daily Mail )

'A very English take on the foibles and failings of humanity permeates THE POISON TREE, a remarkable debut by Erin Kelly.' (Peter Millar, The Times )

'Will appeal to fans of Daphne du Maurier's Rebecca and Donna Tartt's The Secret History . . . a rich and satisfying pleasure.' (USA Today )

'Terrific . . . a compelling creeper that intelligently invokes the conventions of the Gothic and plays within the doom-laden confines of the voice-over. More please, Ms. Kelly! Quickly!' (Washington Post )

'An author with an eye for the truly creepy.'

(Independent on Sunday, Books of the Year )

'The writing is elegant, atmospheric and sophisticated.'

'Ingeniously plotted and masterfully told, THE POISON TREE is an outstanding debut from Erin Kelly. A spellbinding tale of murder, guilt, and obsession, it will hold readers in suspense from the first sentence until the final shocking twist.' (Stefanie Pintoff )

'A tense, twisting thriller . . . Atmospheric and gripping, it will keep you guessing to the end' (Cosmopolitan )

'In her compelling debut, Erin Kelly evokes the brooding atmosphere of Rebecca, in a contemporary and completely convincing novel of tangled family desires.' (Sara Paretsky )

'Tense and menacing right from page one, filled with foreboding and a terrible sense of the inevitable. . . I expect the author to go far.' (Bookseller )

'A psychological thriller that will give you chills' (Red )

'A wonderfully tense and foreboding thriller that is at the same time a clever, considered study of desire and a good old-fashioned page-turner' (Psychologies )

'Weaving tangled webs, this is a gripping psychological thriller with believable characters and a fine sense of time and place. It will keep you intrigued from the menacing prologue to the defiant ending.' (Choice )

'THE POISON TREE has a nicely claustrophobic cape wrapped round it . . . the novel's a clever tease, the pay-off more than worth it.' (Time Out )

'With forensic attention to detail, this mystery is all-consumingly addictive.' --(Easy Living)

'Meticulous and evocative detail does not hold up the impetus of the narrative . . . a most absorbing read.' (www.shotsmag.co.uk)

'I suggest you grab a coffee, silent the phone and get comfy as you're not going to want to put this book done. It's that good . . . A creative, tense, gripping debut novel, and a must read.' --(www.bookrabbit.com ) Book Description:

Book Description HODDER & STOUGHTON, United Kingdom, 2011. Paperback. Condition: New. Language: English. Brand new Book. By the end of that summer, two people would be dead. Fans of In A Dark Dark Wood and The Couple Next Door will love this twisty thriller. I have given up so much and done so many terrible things already for the sake of my family that I can only keep going. I do not know what is going to happen to us. I am frightened, but I feel strong. I have the strength of a woman who has everything to lose.In the sweltering summer of 1997, strait-laced, straight-A student Karen met Biba - a bohemian and impossibly glamorous aspiring actress.She was quickly drawn into Biba's world, and for a while life was one long summer of love.But every summer must end. By the end of theirs, two people were dead - and now Karen's past has come back to haunt her . . .STONE MOTHERS, the new novel by Erin Kelly, is available to buy now!. Seller Inventory # AAZ9781444701050

Book Description Hodder & Stoughton, 2011. Paperback. Condition: New. Paperback. It is the sweltering summer of 1997, and Karen is a strait-laced, straight-A university student. When she meets the impossibly glamorous Biba, a bohemian orphan who lives in a crumbling ol.Shipping may be from multiple locations in the US or from the UK, depending on stock availability. 368 pages. 0.775. Seller Inventory # 9781444701050