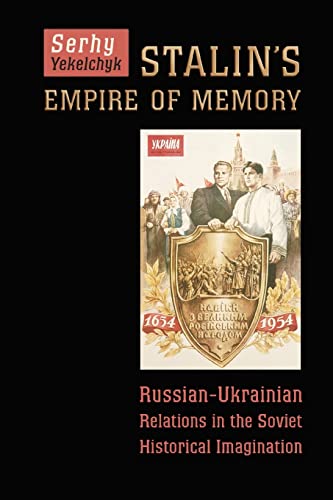 Based on declassified materials from eight Ukrainian and Russian archives, Stalin's Empire of Memory, offers a complex and vivid analysis of the politics of memory under Stalinism. Using the Ukrainian republic as a case study, Serhy Yekelchyk elucidates the intricate interaction between the Kremlin, non-Russian intellectuals, and their audiences. Yekelchyk posits that contemporary representations of the past reflected the USSR's evolution into an empire with a complex hierarchy among its nations. In reality, he argues, the authorities never quite managed to control popular historical imagination or fully reconcile Russia's 'glorious past' with national mythologies of the non-Russian nationalities. Combining archival research with an innovative methodology that links scholarly and political texts with the literary works and artistic images, Stalin's Empire of Memory presents a lucid, readable text that will become a must-have for students, academics, and anyone interested in Russian history.

"Yekelchyk's account is a model of archival research and clear exposition." -- Timothy Snyder "By masterfully integrating theories of collective memory with archival research and by detailing the party's compromises with the past, Yekelchyk has produced a rich and thought-provoking assessment of the politics of memory in Soviet Ukraine." -- George O. Liber "Yekelchyk's investigation of the 'creation' of Soviet Ukraine is nothing less than an interdisciplinary tour de force that supplies fascinating insight into the party's accidental role in the formation of the USSR's successor states." -- David Brandenberger "Of significant interest to the broader scholarly audience interested in problems of nationalism, colonialism, and imperialism, as well as to college students beginning to explore these issues." --Denis Kozlov

Serhy Yekelchyk is an assistant professor in the Departments of History and Germanic and Russian Studies at the University of Victoria.