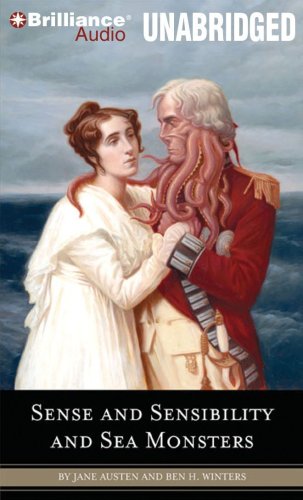 In nineteenth-century England, two sisters are drawn into unhappy romances as sensible Elinor falls in love with Edward Ferrars and Marianne finds herself courted by both handsome Willoughby and Colonel Brandon, a sea monster.

The reinterpretation of Jane Austen's novel (Pride and Prejudice and Zombies) will be followed with the release of Sense and Sensibility and Sea Monsters... The books were created by US-based publishing house, Quirk Books. Jason Rekulak, the editorial director, said he pioneered the format after meeting dozens of Austen fans at a Californian sci-fi convention. He told the Independent that he was a "lifelong fan" of the works of Jules Verne, and thought it would be fun to enliven the follow-up with some rampaging giant squid and man-eating octopuses...'
--The Telegraph, 13 August 2009

The crossover between fans of Jane Austen and lovers of B-movie horror is small, but it is enough to warrant a follow-up to Pride and Prejudice and Zombies. An instant classic that saw the Bennet sisters meet the undead, it sold more than half a million copies in English and was then translated into 17 languages. This follow-up literary 'mash-up' has the Dashwood girls looking for love in a watery England at the mercy of vengeful sea creatures. Forget sprained ankles in Devonshire, Ben Winters has introduced a gigantic, man-eating jellyfish and packed the poor girls off to the Pestilent Isle under the care of retired adventurer Sir John Middleton, who sports a necklace of human ears, while Colonel Brandon's sideburns are a horrific abberation. Winters lets Austen set the tone and the plot swims surprisingly faitfully in her wake. It's a very silly conceit, mixing Regency manners with a Jules Verne topography, but it is as attention-grabbing as a two-headed creature rising from the deep, while diving suits are far more becoming than frocks.
--The Guardian, 3 October 2009

Jane Austen is coauthor of the New York Times best seller Pride and Prejudice and Zombies, which has been translated into 17 languages and optioned to become a major motion picture. She died in 1817. Ben H. Winters is a writer based in Brooklyn.