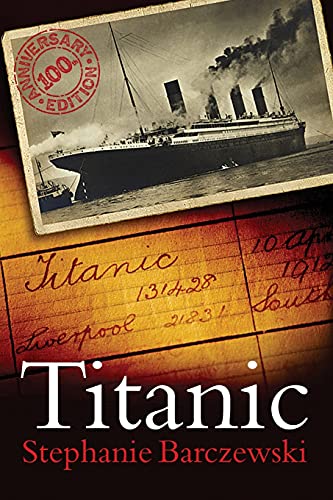 A story that never loses its power to shock... those who have not previously read a detailed account will find this one absorbing...The author gives us a number of fascinating potted biographies, including that of Jack Phillips, the Titanic's wireless operator, Wallace Hartley, bandleader of the ship's eight-man orchestra, and Captain Edward Smith, master of the ship on its first and only voyage. It is blundering Smith who most captures the imagination. In the photographs he stands there, every inch the venerable sea captain, holding the lead of a giant white dog. One finds it hard to believe that he could be so criminally irresponsible as to disregard the numerous ice warnings and continue to race towards New York while other ships had dropped anchor. There was not just one iceberg; when dawn came on that terrible 15 April, the survivors in the boats saw a horizon dotted with great chunks of ice
Beryl Bainbridge in The New Statesman

Stephanie Barczewski is recounting a collective memory, still echoing a hundred years after the Titanic disaster...To her everlasting credit, she devotes more time to the men and women who built the Titanic and who crewed her - who essentially brought the Titanic to life - than to those who merely inhabited her for a few days. Those are memories which deserve to be memorialized, and Barczewski has done exactly that: brava!
Daniel Allen Butler, author of Unsinkable: The Full Story of the RMS Titanic
For its ability to challenge conventional wisdom over Titanic heroism, to bring to life the places associated with the ship and the many colourful characters associated with the disaster, [this book] is well worth a read --The Irish Independent

Why does the story of the Titanic continue to fascinate us nearly 100 years after the event? And why do we in Britain feel such ownership of the tragedy?

Published on April 15th 2004, the 92nd anniversary of the tragedy, Titanic A Night Remembered, is the first substantial account of the local impact of the event and an investigation of the struggle between the US and Britain for ownership of this story

Certainly, there are universal elements.‘It is a story of how much human ingenuity can achieve and how easily that same ingenuity can fail in a brief, random encounter with the forces of nature. It is a story of how different human beings react differently to dire peril...in which the closest bonds that human beings can form were put to the test as people were forced to make impossible choices.’

But equally it is a story of local interest, particularly in the three towns most closely involved with the ship: Belfast, where the ship was built; Southampton – where most of the crew came from and Queenstown, in Eire, the ship’s last port of call. Titanic: A Night Remembered is the first book to explore the shattering impact of the tragedy on the people of these towns.

Stephanie Barczewski also examines the struggle between Britain and America for ownership of the Titanic story, a struggle highlighted most recently by James Cameron’s film. She dissects the myths that have built up about the contrast between English and American cultural values highlighted by the tragedy. Her scholarly and readable account explores the human experience of the collision and the ripples that it sent across the world and down the years.

Book Description Continuum Publishing Corporation, United States, 2012. Paperback. Condition: New. Anniversary edition. Language: English. Brand new Book. This is an anniversary edition of a highly-regarded account of the world's most notorious tragedy at sea. In a night of unforgettable tragedy, the world's most famous liner struck an iceberg on 14 April 1912 and sank. Over 1500 people died. Whose fault it was, and how the passengers and crew reacted, has been the subject of continuing dispute over the 100 years since the disaster. This is an account of Titanic's tragic maiden voyage which also focuses on some of those who died: among them Titanic's captain Edward Smith and builder Thomas Andrews, John Jacob Astor, the richest man on board, and the bandmaster, Wallace Hartley, who played as the ship sank. In this centenary edition, Stephanie Barczewski traces the events of that fatal night. Many of those who died were treated as heroes and how these men were remembered says much about contemporary values of manhood, chivalry and national pride. "Titanic: A Night Remembered" also sets the liner in the context of three ports: Belfast, where she was built; Southampton, which lost 600 citizens as members of her crew; and, Queenstown in Ireland, her last port of call. Seller Inventory # AAV9781441161697

Book Description Continuum, 2020. Paperback. Condition: NEW. 9781441161697 This listing is a new book, a title currently in-print which we order directly and immediately from the publisher. Print on Demand title, produced to the highest standard, and there would be a delay in dispatch of around 10 working days. For all enquiries, please contact Herb Tandree Philosophy Books directly - customer service is our primary goal. Seller Inventory # HTANDREE0139785