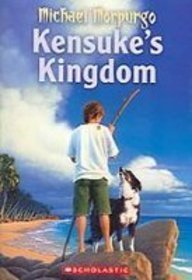 When Michael's father loses his job, he buys a boat and convinces Michael and his mother to sail around the world. It's an ideal trip - even Michael's sheepdog can come along. It starts out as the perfect family adventure - until Michael is swept overboard. He's washed up on an island, where he struggles to survive. Then he discovers that he's not alone. His fellow-castaway, Kensuke, is wary of him. But when Michael's life is threatened, Kensuke slowly lets the boy into his world. The two develop a close understanding in this remote place, but the question of rescue continues to divide them.

It would be foolish to think that Michael Morpurgo, author of the award-winning When the Whales Came, could create something that would prove to be anything less than stunning and here, in Kensuke's Kingdom, he certainly proves he has not lost his magic touch.

When Michael is washed up on an island in the Pacific after falling from his parent's yacht, the Peggy Sue, he struggles to survive on his own. But he soon realises there is someone close by, someone who is watching over him and helping him to stay alive. After close-run battle between life and death after being stung by a poisonous jelly fish, the mysterious someone--Kensuke--allows Michael into his world and they become friends, teaching and learning from each other, until the day separation becomes inevitable.

Morpurgo here spins a yarn which gently captures the adventurous elements one would expect from a desert-island tale, but the real strength lies in the poignant and subtle observations of friendship, trust and, ultimately, humanity.

Beautifully illustrated by Michael Foreman, Kensuke's Kingdom is a stylish, deceptively simple and utterly magical book that will effortlessly capture the heart and imagination of anyone who reads it, ensuring that Morpurgo continues to stand tall amid the ranks of classic children's authors. (Age 9 and over) --Susan Harrison

“This is a wonderful book, a modern day Robinson Crusoe and is simply too good to miss.”
Wendy Cooling

Book Description Library Binding. Condition: GOOD. Spine creases, wear to binding and pages from reading. May contain limited notes, underlining or highlighting that does affect the text. Possible ex library copy, will have the markings and stickers associated from the library. Accessories such as CD, codes, toys, may not be included. Seller Inventory # 3384256296

Book Description Library Binding. Condition: Very Good. Item is in very good condition. If supplemental codes/CDs for textbooks are required please contact us prior to purchasing as they may be missing. Photos are stock pictures and not of the actual item. Seller Inventory # DS-1435287509-2