Items related to A Breath of Hope: 2 (Under Northern Skies)

Snelling, Lauraine A Breath of Hope: 2 (Under Northern Skies)

A Breath of Hope: 2 (Under Northern Skies) 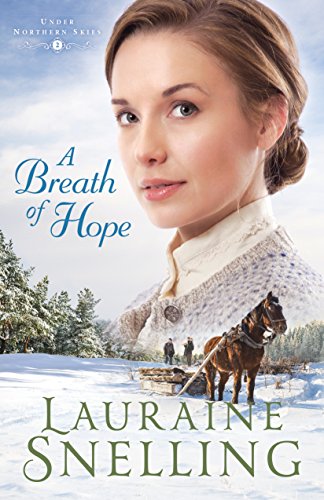 Nilda Carlson has been trying to save enough money to go to America for months, so when a letter from Einar and Gerd Strand arrives, offering to pay her ticket, she jumps at the chance. Her younger brother Ivar accompanies her, and they can't wait to join their brother Rune and his family in the northern forests of Minnesota. Signe and Rune Carlson are thrilled to welcome Nilda and Ivar to America, but life on the farm remains a struggle. Though Gerd has softened and grown to love the Carlson family, Einar is still harsh and unforgiving, obsessed solely with felling as many trees as possible. Rune is trying to build a new home for his wife and children, but Einar refuses to help and forbids anyone from the nearby community from stepping foot on his land. What dark secret must lie in his past to have caused him to isolate himself--and anyone living under his roof--in this way? When a tragedy lays the truth bare, the Carlsons and Strands will have to come together like never before and become a true family.

One man's past could affect all of their futures.

With her younger brother Ivar in tow, Nilda Carlson is on her way to America to join her older brother Rune and his family in the northern forests of Minnesota. While she sees this as a golden opportunity, she has enough experience in life to know it won't be easy. The transatlantic voyage itself proves to be an adventure, and she hopes she will feel safe in her new home. Rune and Signe Carlson are thrilled that Nilda and Ivar are coming to Minnesota, but life on the Strand farm remains a struggle. Rune is trying to build a house for his wife and children, but Uncle Einar Strand, obsessed with his own ambitions, refuses to help. What's more, he forbids anyone from the community to step foot on his land, leaving Rune to toil on his own. When a tragedy lays bare the truth behind Einar's anger and isolation, the Carlsons and Strands will have to come together like never before to become a true family. From the Inside Flap:

Lauraine Snelling is the award-winning author of over 70 books, fiction and nonfiction, for adults and young adults. Her books have sold over 5 million copies. Besides writing books and articles, she teaches at writers' conferences across the country. She and her husband make their home in Tehachapi, California.

A Breath of Hope (Under Northern Skies)

Book Description Condition: Very Good. Former library book; may include library markings. Used book that is in excellent condition. May show signs of wear or have minor defects. Seller Inventory # 15390963-6

A Breath of Hope (Under Northern Skies)