Items related to Where She Belongs

Cindy Procter-King Where She Belongs 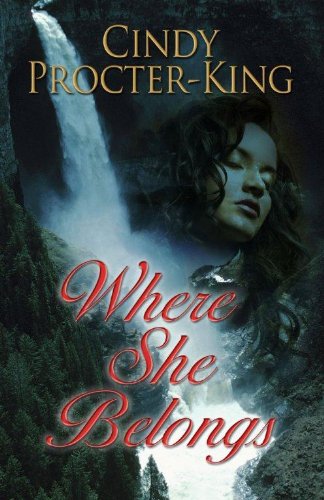 She never wants to go home again. For Jess Morgan, Destiny Falls holds too many painful memories. Nine years ago, a logging accident near the remote timber town killed her dad and her high school sweetheart. To make matters worse, her mother quickly sought comfort with another man. That choice tore Jess apart and drove her to seek a life far away. But now fate steps in, and family obligations force her return home. Before long, she's convinced that persuading her mom to live with her in Toronto will repair their shattered bond. However, she doesn't count on a long-ago friend re-entering her life and challenging her convictions. Rugged forester Adam Wright believes in family, roots, and not running from heartache. Now, all he wants is to help Jess break down the walls of the lonely sanctuary she's built for herself and heal her past hurts. It's not until she rejects his proposal that Adam realizes his legendary persistence has pushed her further away—not at all what he intended. Has he lost his chance? Or can he convince Jess that where she truly belongs is with him...forever?

As a child, Cindy dreamed of becoming a writer. Well, okay, thanks to her grade three teacher reading a chapter of The Little House on the Prairie books to Cindy's class everyday, Cindy actually dreamed of becoming Laura Ingalls Wilder. It made so much sense. After all, Cindy's blond older sister always got to wear blue while Cindy with the "dark as cinders" hair was often relegated to wearing dull old pink--just like Laura. Laura was part of a pioneer family, and until Cindy went to school she lived in a miniscule farming community where her father and grandparents were born. What further confirmation for her future does an eight-year-old with an avid imagination require? When Cindy realized becoming Laura meant learning to travel back in time and using--gasp!--outhouses where she believed evil trolls were hiding to gobble her up, she decided to remain in the present and become a writer instead. Her first poem began, "My father is a logger, He stirs his coffee with his thumb, He has a dog named Blackie, And in his truck they both look dumb." Thus another illustrious literary career was born. Cindy earned a first class B.A. in English Lit. from the University of Victoria before unleashing herself on the unsuspecting workforce. However, she quickly realized her aversion to fluorescent lights and the numbers 9-2-5 wouldn't gain her kudos from her various bosses. Luckily, she married Steven King (note the lack of a "ph"), who whisked her to a tiny logging town where she couldn't find a job...unless you count her stint as secretary to the warden of a minimum security prison. There, Cindy began writing novels, and she hasn't looked back. Because, honestly, what other employer in their right mind would want her? A Romance Writers of America Golden Heart® finalist and author of rollicking romantic comedies and emotional contemporary romance, Cindy's mission in life is to see her surname spelled properly--with an E. So take heed. That's P-r-o-c-t-E-r. Not, no, never, under any flippin' circumstances should you spell it with two O's. Cindy lives in Canada with her husband, their two grown sons, a cat obsessed with dripping tap water, and Allie McBeagle.