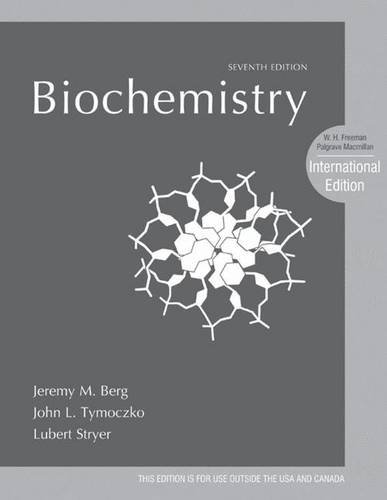 Since its first edition in 1975, this extraordinary textbook has helped shape the way that biochemistry is taught, and has become one of the most trusted books in the field. It offers exceptionally clear writing, innovative graphics, coverage of the latest research techniques and advances, and a signature emphasis on physiological and medical relevance.

The seventh edition has been updated throughout, including many new advances on genetic regulation, and revamped coverage of the integration of metabolism in the context of diet and obesity. Numerous new medical examples have been added throughout to make biochemistry real and relevant to students. The addition of new contributing author Gregory Gatto, an active pharmaceutical researcher at GlaxoSmithKline, ensures that the seventh edition presents the latest techniques that students need to understand in biochemistry research today. The end-of-chapter problems have also been revised and updated, providing students with great new exercises to test their understanding.

The book is supported by a companion website (www.whfreeman.com/berg7e) which provides a variety of tools to aid understanding and learning including concept-based tutorials, animated techniques, self-assessment tools, and living figures that allow protein structures to be explored in 3-D.

One of the most trusted and best-selling books in the field, Biochemistry by Berg, Tymoczko and Stryer, is now available in a new, revised and updated 7th edition.

JEREMY M. BERG was Professor and Director of the Department of Biophysics and Biophysical Chemistry at Johns Hopkins University School of Medicine, USA, where he remained until 2003. He then became Director of the National Institute of General Medical Sciences at the National Institutes of Health. He is an elected Fellow of the American Association for the Advancement of Science. He is the recipient of the American Chemical Society Award in Pure Chemistry (1994), the Eli Lilly Award for Fundamental Research in Biological Chemistry (1995), the Maryland Outstanding Young Scientist of the Year (1995), the Harrison Howe Award (1997), the Distinguished Service Award from the Biophysical Society (2009), and the Howard K. Schachman Public Service Award from the American Society for Biochemistry and Molecular Biology (2011). He also won numerous teaching awards including the W. Barry Wood Teaching Award (selected by medical students), the Graduate Student Teaching Award, and the Professor's Teaching Award for the Preclinical Sciences.

JOHN L. TYMOCZKO is Towsley Professor of Biology at Carleton College, USA, where he has taught since 1976. He currently teaches Biochemistry, Biochemistry Laboratory, Oncogenes and the Molecular Biology of Cancer, and Exercise Biochemistry and co-teaches an introductory course, Energy Flow in Biological Systems. The focus of his research has been on steroid receptors, ribonucleoprotein particles, and proteolytic processing enzymes.

LUBERT STRYER is Winzer Professor of Cell Biology, Emeritus, in the School of Medicine and Professor of Neurobiology, Emeritus, at Stanford University, USA, where he has been on the faculty since 1976. Professor Stryer has received many awards for his research on the interplay of light and life, including the Eli Lilly Award for Fundamental Research in Biological Chemistry and the Distinguished Inventors Award of the Intellectual Property Owners' Association. He was elected to the National Academy of Sciences in 1984. He currently chairs the Scientific Advisory Boards of two biotechnology companies - Affymax, Inc., and Senomyx, Inc. - and serves on the Board of the McKnight Endowment Fund for Neuroscience. The publication of his first edition of Biochemistry in 1975 transformed the teaching of biochemistry.

GREGORY J. GATTO, Jr. received his A.B. degree in Chemistry from Princeton University, USA, where he worked with Martin F. Semmelhack and was awarded the Everett S. Wallis Prize in Organic Chemistry. In 2003, he received his M.D. and Ph.D. degrees from the John Hopkins University School of Medicine, USA, where he studied the structural biology of peroxisomal targetting signal recognition with Jeremy M. Berg and received the Michael A. Shanoff Young Investigator Research Award. He then completed a postdoctoral fellowship in 2006 with Christopher T. Walsh at Harvard Medical School, where he studied the biosynthesis of the macrolide immunosuppressants. He is currently an Investigator in the Heart Failure Discovery Performance Unit at GlaxoSmithKline Pharmaceuticals (gsk).