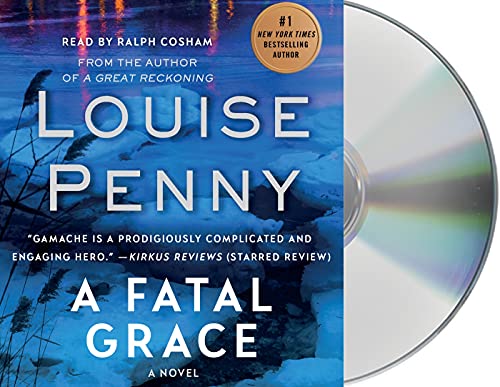 Winner of the 2007 Agatha Award for Best Novel!Welcome to winter in Three Pines, a picturesque village in Quebec, where the villagers are preparing for a traditional country Christmas, and someone is preparing for murder.No one liked CC de Poitiers. Not her quiet husband, not her spineless lover, not her pathetic daughter and certainly none of the residents of Three Pines. CC de Poitiers managed to alienate everyone, right up until the moment of her death. When Chief Inspector Armand Gamache, of the Surete du Quebec, is called to investigate, he quickly realizes he's dealing with someone quite extraordinary. CC de Poitiers was electrocuted in the middle of a frozen lake, in front of the entire village, as she watched the annual curling tournament. And yet no one saw anything. Who could have been insane enough to try such a macabre method of murder or brilliant enough to succeed?With his trademark compassion and courage, Gamache digs beneath the idyllic surface of village life to find the dangerous secrets long buried there. For a Quebec winter is not only staggeringly beautiful but deadly, and the people of Three Pines know better than to reveal too much of themselves. But other dangers are becoming clear to Gamache. As a bitter wind blows into the village, something even more chilling is coming for Gamache himself."

'A wonderful novel of mystery. It is as deeply layered as snow drifting down over snow. The cold will seep into your bones' (Shots magazine)

'Beautifully written... With DEAD COLD, Penny has firmly established herself among the best in Canadian crime fiction' (Calgary Herald)

'Gamache has the same mellowed intelligence [as] Maigret. The setting is wonderfully done, as are the characters' (Toronto Globe and Mail)

'Sooner or later, the whole world will discover Penny. With a unique sense of timing, patience and subtle wit, Penny is able to create a whodunit that recalls those of Agatha Christie' (Chronicle Herald)

'Dark, witty, delicious... A cast of characters both engaging and repellent, fiendish clues, clever red herrings, and an original plot in which events come together in a maelstrom of fire and ice' (Sherbrooke Record)

'The writing is superb and the descriptions of Canadian village life and its lively characters bring it all to life... A magnificent read, with full marks for inventiveness and sheer descriptive power' (Tangled Web)

'Remarkably, Penny manages to top her outstanding debut. Gamache is destined to become one of the classic detectives' (Kirkus)

'A resounding success. Plan on setting some time aside for this book - it's that good' (Ontario Record)