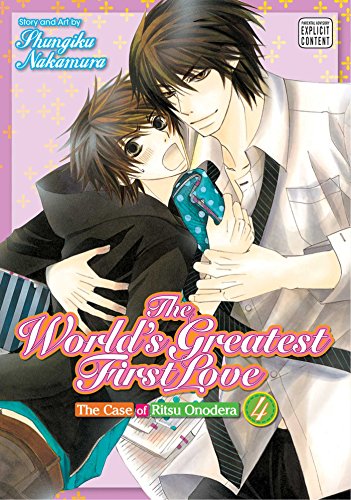 Ritsu Onodera, an editor in the shojo manga department of Marukawa Publishing, has the worst work environment possible, primarily because it's run by his former fi rst love, hotshot editor in chief Masamune Takano! To make matters worse, it's possible that in a recent drunken stupor Ritsu went all the way with his boss. Unfortunately, thanks to an alcohol-induced blackout, he can't remember! But time waits for no one, so work in the editorial department gears up for the year-end rush, and to add to the craziness, Takano declares that all he wants for his birthday on Christmas Eve is to go on a romantic drive with Ritsu!

Shungiku Nakamura is one of the most popular yaoi creators worldwide. She is best known for her series Junjo Romantica, which has been adapted into both an anime and drama CD. Her other English-language title, Hybrid Child, is also being adapted into an anime. Her current series, The World's Greatest First Love, is running in Emerald magazine. Born on December 13, she s a Sagittarius with an O blood type.

Book Description Viz Media, Subs. of Shogakukan Inc, United States, 2016. Paperback. Condition: New. Language: English. Brand new Book. When Ritsu Onodera changes jobs, looking for a fresh start, he's not exactly thrilled when his new boss turns out to be his old flame. Ritsu's determined to leave all that in the past-but how can he when his boss is just as determined that they have a future?. Seller Inventory # BZV9781421588698

Book Description Paperback. Condition: New. Paperback. When Ritsu Onodera changes jobs, looking for a fresh start, he's not exactly thrilled when his new boss turns out to be his old flame. Ritsu's determined to leave all that in the past-but .Shipping may be from multiple locations in the US or from the UK, depending on stock availability. 178 pages. 0.226. Seller Inventory # 9781421588698