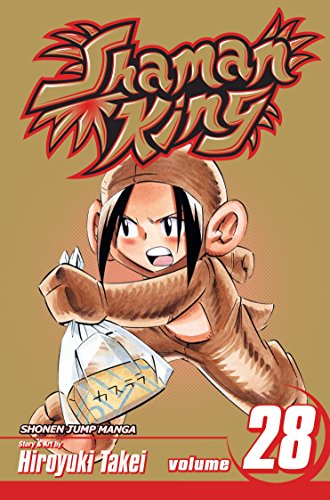 R to L (Japanese Style). Every shaman in the world is vying to be the Shaman King! A Good WomanYoh, Ren, Horohoro, Joco and Lyserg find themselves in their own personal version of Hell. To escape they must reach the level of the five warriors. If they succeed, they will possess the power of the Five High Spirits. But if one of them fails, they will all remain trapped in Hell for eternity!

Unconventional author/artist Hiroyuki Takei began his career by winning the coveted Hop Step Award (for new manga artists) and the Osamu Tezuka Award. After working as an assistant to famed artist Nobuhiro Watsuki (RUROUNI KENSHIN), Takei debuted in Weekly Shonen Jump in 1997 with Butsu Zone, an action series based on Buddhist mythology. His multicultural adventure manga SHAMAN KING debuted in Japan in 1998 and has been adapted into a popular animated television series. The SHAMAN KING manga series is also published in North America by VIZ Media; for many years it was serialized in English in SHONEN JUMP magazine.